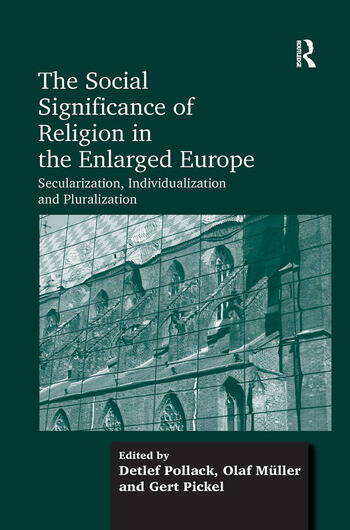 The Social Significance of Religion in the Enlarged Europe: Secularization, Individualization and Pluralization

Engaging with some of the central issues in the sociology of religion, this volume investigates the role and significance of churches and religion in contemporary Western and Eastern Europe. Based on an extensive international research project, it offers case studies of various countries (including Finland, Ireland, Portugal, Germany, Poland, Russia, Estonia, Hungary and Croatia), as well as cross-country comparisons. Researching more precisely the present social relevance of church and religion at different levels, The Social Significance of Religion in the Enlarged Europe raises and responds to both descriptive and explanatory questions: Can we observe tendencies of religious decline in the various Western and Eastern European countries? Are we witnessing trends of religious individualization? To what extent has there been a religious upswing in the last few years? And what are the factors causing the observed processes of religious change? Marked by its broad range of data and a coherent conceptual framework, in accordance with which each chapter assesses the extent to which three important theoretical approaches in the sociology of religion - secularization theory, the market model of religion, and the individualization thesis - are applicable to the data, this book will be of interest to scholars of sociology, politics and religion exploring religious trends and attitudes in contemporary Europe.

’Few scholars would be better qualified than Detlef Pollack and his colleagues to undertake such an ambitious project, and we are in their debt. Where others speculate, they investigate. This volume will be essential reading for everyone studying religious change in Europe or any of the individual countries analyzed by the chapter authors.’ David Voas, University of Essex, UK ’Giving insights into religious fields in many countries of the old� and the new�, enlarged Europe, this collection boasts a consistent, logical, conceptual framework related to discussions of secularization. Highly recommended for anyone interested in religion in Europe and the applicability of theories explaining religious change.’ Irena Borowik, Jagiellonian University, KrakÃ³w, Poland 'The publication of this book is of great value. In a sober and nuanced way, and based on solid empirical material, it will function as a valid argument against the dominating trend in sociology of religion during the past twenty to thirty years since it in an excellent way re-establishes secularization theory as the theory with the largest potential to explain changes on the religious field in Europe.' Journal of Church and State

The Social Significance of Religion in the Enlarged Europe: Secularization, Individualization and Pluralization