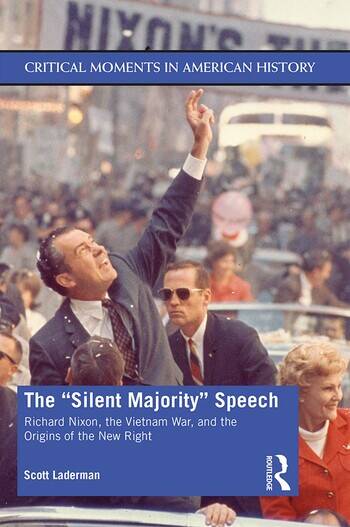 The "Silent Majority" Speech: Richard Nixon, the Vietnam War, and the Origins of the New Right

The "Silent Majority" Speech treats Richard Nixon’s address of November 3, 1969, as a lens through which to examine the latter years of the Vietnam War and their significance to U.S. global power and American domestic life.

The book uses Nixon’s speech – which introduced the policy of "Vietnamization" and cited the so-called bloodbath theory as a justification for continued U.S. involvement in Southeast Asia – as a fascinating moment around which to build an analysis of the last years of the war. For Nixon’s strategy to be successful, he requested the support of what he called the "great silent majority," a term that continues to resonate in American political culture. Scott Laderman moves beyond the war’s final years to address the administration’s hypocritical exploitation of moral rhetoric and its stoking of social divisiveness to achieve policy aims. Laderman explores the antiwar and pro-war movements, the shattering of the liberal consensus, and the stirrings of the right-wing resurgence that would come to define American politics.

A Brief Note on Language

2. Vietnamization and the Illusion of Peace

3. Nixon and the Bloodbath Theory

6. Excerpt from Colonel Robert D. Heinl, Jr., "The Collapse of the Armed

7. Excerpt from George McT. Kahin, "History and the Bloodbath Theory in Vietnam," New

8. Richard Nixon, "Address to the Nation on the Situation in Southeast

Scott Laderman is a professor of history at the University of Minnesota, Duluth. His previous books include Tours of Vietnam: War, Travel Guides, and Memory (2009) and Empire in Waves: A Political History of Surfing (2014).

The "Silent Majority" Speech: Richard Nixon, the Vietnam War, and the Origins of the New Right