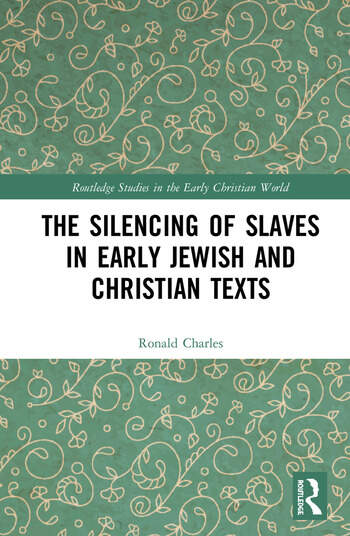 The Silencing of Slaves in Early Jewish and Christian Texts

The Silencing of Slaves in Early Jewish and Christian Texts analyzes a large corpus of early Christian texts and Pseudepigraphic materials to understand how the authors of these texts used, abused and silenced enslaved characters to articulate their own social, political, and theological visions.

The focus is on excavating the texts "from below" or "against the grain" in order to notice the slaves, and in so doing, to problematize and (re)imagine the narratives. Noticing the slaves as literary iterations means paying attention to broader theological, ideological, and rhetorical aims of the texts within which enslaved bodies are constructed. The analysis demonstrates that by silencing slaves and using a rhetoric of violence, the authors of these texts contributed to the construction of myths in which slaves functioned as a useful trope to support the combined power of religion and empire. Thus was created not only the perfect template for the rise and development of a Christian discourse of slavery, but also a rationale for subsequent violence exercised against slave bodies within the Christian Empire.

2 Slaves in the Pseudepigrapha

2.1 Slaves in the Sibylline Oracles

2.2 Slaves in the Testament of the Twelve Patriarchs

2.3 Slaves in the Testament of Job

2.4 Slaves in the Letter of Aristeas

2.5 Slaves in the Book of Jubilees

2.6 Slaves in Joseph and Aseneth

2.7 Slaves in the Wisdom Literature

2.10 Slaves in the Sentences of the Syriac Menander

3.2 A (freed) slave in Philippians

3.3 The slave in Philemon

4 Slaves in the Gospels

4.1 (Re)imagining the slaves in the Gospels

4.2 Focus on particular slave characters in the Gospels

4.2.1 The unnamed female slave of the high priest

4.2.2 The named male slave of the high priest

5 Slaves in the Book of Acts

5.1 The violence on Rhoda

5.4 The violence on the fortune-telling slave

5.5 The tale of three women

6.1 The cases of Felicitas and Blandina

6.3 Moving with Felicitas from the Passio to the Acta

6.4 From Felicitas to Blandina

7 Slaves in the Acts of Andrew

7.1 The used and abused body of Euclia

7.3 A Christian philosophy for the masses

7.5 Reading the Acts of Andrew "from below"

The Silencing of Slaves in Early Jewish and Christian Texts