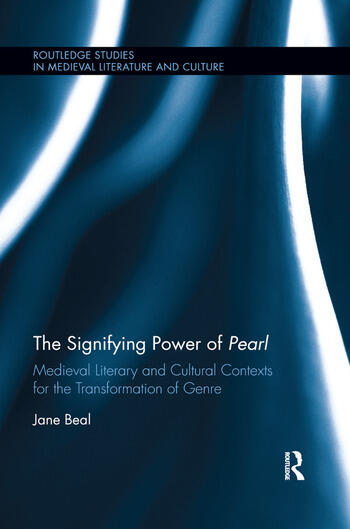 The Signifying Power of Pearl: Medieval Literary and Cultural Contexts for the Transformation of Genre

This book enhances our understanding of the exquisitely beautiful, fourteenth-century, Middle English dream vision poem Pearl. Situating the study in the contexts of medieval literary criticism and contemporary genre theory, Beal argues that the poet intended Pearl to be read at four levels of meaning and in four corresponding genres: literally, an elegy; spiritually, an allegory; morally, a consolation; and anagogically, a revelation. The book addresses cruxes and scholarly debates about the poem’s genre and meaning, including key questions that have been unresolved in Pearl studies for over a century:

* What is the nature of the relationship between the Dreamer and the Maiden?

* What is the significance of allusions to Ovidian love stories and the use of liturgical time in the poem?

* How does avian symbolism, like that of the central symbol of the pearl, develop, transform, and add meaning throughout the dream vision?

* What is the nature of God portrayed in the poem, and how does the portrayal of the Maiden’s intimate relationship to God, her spiritual marriage to the Lamb, connect to the poet’s purpose in writing?

Noting that the poem is open to many interpretations, Beal also considers folktale genre patterns in Pearl, including those drawn from parable, fable, and fairy-tale. The conclusion considers Pearl in the light of modern psychological theories of grieving and trauma. This book makes a compelling case for re-reading Pearl and recognizing the poem’s signifying power. Given the ongoing possibility of new interpretations, it will appeal to those who specialize in Pearl as well as scholars of Middle English, Medieval Literature, Genre Theory, and Literature and Religion.

Jane Beal, PhD is an Associate Researcher in the Department of English at the University of California, Davis. Her academic monograph, The Signifying Power of Pearl, is available from Routledge. She is also the author of John Trevisa and the English Polychronicon (ACMRS/Brepols, 2013), editor of Illuminating Moses: A History of Reception from Exodus to the Renaissance (Brill, 2014), and co-editor of Translating the Past: Essays on Medieval Literature (ACMRS, 2012) and Approaches to Teaching the Middle English Pearl (MLA, forthcoming). In addition to literary criticism and studies of collegiate pedagogy, she writes poetry, fiction, and creative non-fiction and composes new work in translation. To learn more, please visit sanctuarypoet.net and medievalpearl.wordpress.com.

The Signifying Power of Pearl: Medieval Literary and Cultural Contexts for the Transformation of Genre