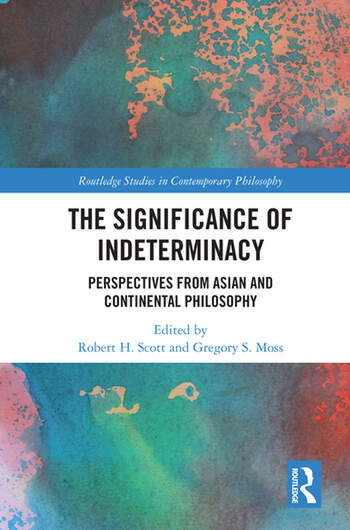 The Significance of Indeterminacy: Perspectives from Asian and Continental Philosophy

While indeterminacy is a recurrent theme in philosophy, less progress has been made in clarifying its significance for various philosophical and interdisciplinary contexts. This collection brings together early-career and well-known philosophers—including Graham Priest, Trish Glazebrook, Steven Crowell, Robert Neville, Todd May, and William Desmond—to explore indeterminacy in greater detail. The volume is unique in that its essays demonstrate the positive significance of indeterminacy, insofar as indeterminacy opens up new fields of discourse and illuminates neglected aspects of various concepts and phenomena. The essays are organized thematically around indeterminacy’s impact on various areas of philosophy, including post-Kantian idealism, phenomenology, ethics, hermeneutics, aesthetics, and East Asian philosophy. They also take an interdisciplinary approach by elaborating the conceptual connections between indeterminacy and literature, music, religion, and science.

Introduction: The Emerging Philosophical Recognition of the Significance of Indeterminacy

Part I: The Significance of Indeterminacy in German Idealism

4. Indeterminacy, Modality, Dialectics: Hegel on the Possibility Not to Be

Part II: The Significance of Indeterminacy for Phenomenology, Natural Science, and Ethics

5. Determinable Indeterminacy: A Note on the Phenomenology of Horizons

7. Genetic Phenomenology and the Indeterminacy of Racism

8. Indeterminacy as Key to a Phenomenological Reinterpretation of Aristotle’s Intellectual Virtues

9. The Effability of the Normative

Part III: The Significance of Indeterminacy for Hermeneutics and Aesthetics

12. Against the Darkness: Beauty and Indeterminacy in John Williams’s Stoner

14. Heidegger and Dōgen on the Ineffable

17. Indeterminacy in Chinese Thought: Spontaneity and the Dao

Robert H. Scott is an Assistant Professor of Philosophy at the University of North Georgia. His research focuses on phenomenology and environmental ethics, and in his recent published work he has developed a phenomenological theory of ecological responsibility. Dr. Scott currently serves as the President of the Georgia Philosophical Society.

Gregory S. Moss is currently an Assistant Professor of Philosophy at Chinese University of Hong Kong. He specializes in Post-Kantian German philosophy, and has published in a variety of philosophical journals, such as Idealistic Studies, International Philosophical Quarterly, the Journal for the British Society for Phenomenology, Journal of Speculative Philosophy, and the Northern European Journal of Philosophy (forthcoming). Before completing his PhD on Hegel’s Logic of the Concept under Richard Winfield, he was a Fulbright Fellow with Markus Gabriel at the Rheinische Friedrich-Wilhelms-Universität Bonn. He is author of Ernst Cassirer and the Autonomy of Language and translator for Markus Gabriel’s Why the World Does Not Exist. His forthcoming book Hegel’s Foundation Free Metaphysics: The Logic of Singularity is forthcoming with Routledge,

The Significance of Indeterminacy: Perspectives from Asian and Continental Philosophy