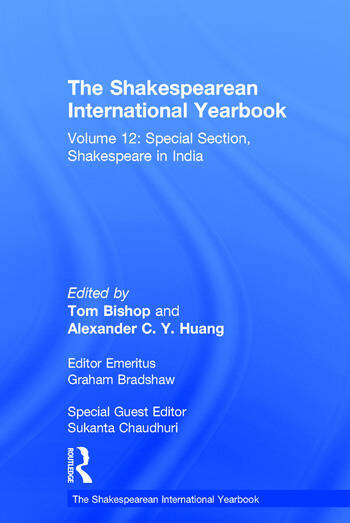 This eighth volume of The Shakespearean International Yearbook presents a special section on 'European Shakespeares', proceeding from the claim that Shakespeare's literary craft was not just native English or British, but was filtered and fashioned through a Renaissance awareness that needs to be recognized as European, and that has had effects and afterlives across the Continent. Guest editors Ton Hoenselaars and Clara Calvo have constructed this section to highlight both how the spread of 'Shakespeare' throughout Europe has brought together the energies of a wide variety of European cultures across several centuries, and how the inclusion of Shakespeare in European culture has been not only a European but also a world affair. The Shakespearean International Yearbook continues to provide an annual survey of important issues and developments in contemporary Shakespeare studies. Contributors to this issue come from the US and the UK, Spain, Switzerland and South Africa, Canada, The Netherlands, India, Portugal, Greece, France, and Hungary. In addition to the section on European Shakespeares, this volume includes essays on the genre of romance, issues of character, and other topics.

Sukanta Chaudhuri is Professor Emeritus at Jadavpur University in Kolkata. Tom Bishop is based at the University of Auckland, New Zealand. Alexa Huang is a Professor of English at George Washington University