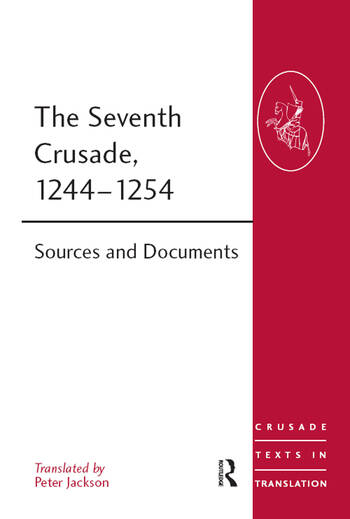 The Seventh Crusade, led by King Louis IX of France, was the last major expedition for the recovery of the Holy Land actually to reach the Near East. The failure of his invasion of Egypt (1249-50), followed by his four-year stay in Palestine in order to retrieve the disaster, had a profound impact on the Latin West. In addition, Louis's operations in the Nile delta indirectly precipitated the Mamluk coup d'état, which ended the rule of the Ayyubids, Saladin's dynasty, in Egypt and began the transfer of power there to a military elite that would prove to be a far more formidable enemy to the Franks of Syria and Palestine. This volume comprises translations of the principal documents and of extracts from narrative sources - both Muslim and Christian - relating to the crusade, and includes many texts, notably the account of Ibn Wasil, not previously available in English. The themes covered include: the preparations and search for allies; the campaign in the Nile delta; the impact on recruitment of the simultaneous crusade against the emperor Frederick II; the Mamluk coup and its immediate consequences in the Near East; Western reactions to the failure in Egypt; and the popular 'crusade' of the Pastoureaux in France (1251), which aimed originally to help the absent king, but which degenerated into violence against the clergy and the Jews and had to be suppressed by force.

Contents: Preface; Introduction; King Louis takes the Cross; Preparations for the crusade; The attitude of the Emperor Frederick II; Rival crusades; The 1st phase of the crusade: victory and disaster in Egypt; Events in the Muslim camp, and the Mamluk coup d'état; The reaction to failure: criticism and the rational explanation; The 'crusade' of the pastoureaux (1251); Efforts to send assistance to King Louis from the West; The 2nd phase: King Louis's 4-year stay in Palestine; Bibliography; Index.

Peter Jackson is Professor of Medieval History at Keele University, UK, and an acknowledged authority on the history of the Mongol Empire, the Eastern Islamic world in the later Middle Ages, and on the Crusades and the Latin East.

’A very informative overview of several pages at the beginning of each chapter puts the subsequent sources in their historical context. There are numerous reference and explanatory footnotes and an outstanding up-to-date bibliography for Christian and Muslim sources. An excellent source collection that conveniently assembles English translations of all major original sources for the Seventh Crusade. Highly Recommended.’ Choice ’It is a convenient way to survey a vast documentation in all its multifaceted complexity, useful to the expert, the near expert, and the student alike. I personally would recommend a thorough examination of this volume for anyone studying the First or Second Crusades... Taken as a whole this is a splendid addition to the series on Crusader Texts in Translation.’ The Medieval Review ’Jackson is a renowned expert on the thirteenth century, in particular on the Mongol invasions. Here he shows himself to be a superb translator and judicious commentator. ... There are many collections of crusade sources in translation. Peter Jackson’s is one of the best.’ Catholic Historical Review ’Each section of this book comes with a careful introduction, presenting and explaining the events in a very clear, very comprehensive way, which makes this book more than a collection of texts: an excellent history of the Crusades.’ Revue d'histoire ecclésiastique ’... has an ideal compiler and translator in Peter Jackson, an accomplished historian who is at home in both western and oriental languages.... the bulk of the volume, containing the material on the crusade before 1250, is a tour de force. This is a first-class addition to a worthy series.’ Journal of Ecclesiastical History ’Professor Jackson is to be congratulated on what will be a required textbook for any student course not just, it is to be hoped, on thirteenth-century crusading, but on government, politics and diplomacy as well.’ English Historical Review ’By gatheri