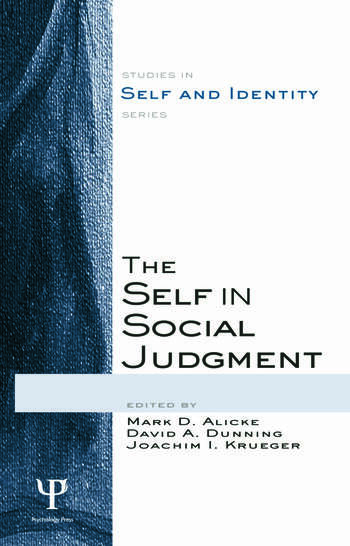 The Self in Social Judgment

· the role of the self as an information source for evaluating others, or what has been called 'social projection'
· the assumption of personal superiority as reflected in the pervasive tendency for people to view their characteristics more favorably than those of others
· the role of the self as a comparison standard from or toward which other people's behaviors and attributes are assimilated or contrasted
· the relative weight people place on the individual and collective selves in defining their attributes and comparing them to those of other people

"This volume consists of a set of inspired, well-written, and cohesive chapters regarding the role of the self in social perceptions and social judgments. This next gerneration collection will set the research agenda for social psychologists." —Jerry Suls, University of Iowa

"This lively, scholarly collection will be indispensable to researchers of the self and of social cognition, and will inspire more study of the integration of the two." —Joanne V. Wood, Universtiy of Waterloo

"Some chapters provide valuable reviews of established lines of research on self and social judgment, while others offer intriguing new perspectives on how views of the self relate to views of others—an essential resource for anyone interested in the role of the self in social perception and judgment." —Jeff Greenberg, University of Arizona

"The editors... state in the introduction that their goal in organizing the volume was not only to bring together diverse research approaches to the topic of the self and social judgment but also to identify major themes and unresolved issues at the intersection of the self and social judgment. In my opinion, they succeeded" —Norman Noach Milgram, in PsycCRITIQUES, August 2006

The Self in Social Judgment