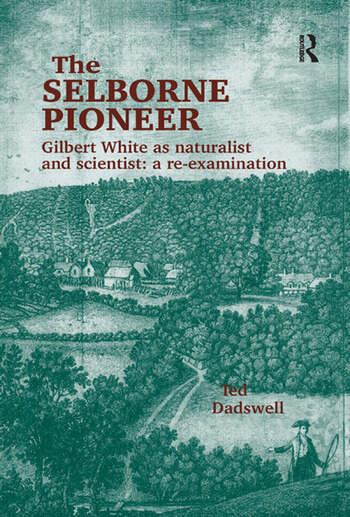 The Selborne Pioneer: Gilbert White as Naturalist and Scientist: A Re-Examination

Gilbert White's name is known universally but, as Ted Dadswell insists in this book, important aspects of his work have frequently been overlooked even by scholarly editors. The Selborne naturalist (1720-1793) has been described as 'a prince of personal observers'; but a shrewd analytical questioning and comparing was also typical of his 'natural knowledge'. Exceptional even in his general aims, White studied the behaviour, the 'manners' and 'conversation', of his animals and plants. He saw, moreover, that an animal or plant and indeed a parish such as his own, was unitary in operation; again and again, a cause had numerous effects and an effect numerous causes. Observation could go forward in circumstances such as these, if one was both sharp-eyed and patient, but how could true investigation be managed? How could a particular cause or effect be isolated or tested? Here what Dadswell calls White's 'comparative habit' was put to good use. Gilbert White was a careful keeper of records, and using these comparatively he 'appealed to controls' while examining his living creatures. Questioning and testing even the 'entirely usual', White was brought back repeatedly to the notion of adaptability. His zoological findings often concerned 'changed or changing' animals (or birds) and their social and inter-personal relationships. Today, we can seem particularly well placed to appreciate his methods and factual claims; our 'ethologists' and ecologists have - seemingly - corroborated much of what he did. And yet just this corroboration renders him the more mysterious. To properly assess White as naturalist, we must be able to approach him not only scientifically but also historically. He hoped for the emergence of teams of behavioural workers but did not try to pre-empt what would be achieved only by such teams, and while he 'saw with his own eyes', as his friend John Mulso says, he was substantially affected by certain of his contemporaries and predecessors. His journals and notebooks show us the naturalist at work. When a perhaps unexpected combination of influences is allowed for, his 'unique' activities can be at least partially explained.

Contents: Preface; The heroic gardener; Nature as an 'economy'; The 'outdoor' method; The disappearing 'swallows'; Behaviour; birds and other animals; Instinct and initiative; Behaviour; plants and insects; The useful naturalist; Science, meteorology and geology; The problem of adaptation; 'Living manners'; The perennial naturalist; Appendixes: Dissection of a live dog; Bird migration as a fact; Reports of 'torpid' swallows; The sin of cruelty; Design in shell-bearing animals; Bibliography; Index.

Ted Dadswell was educated at Collyer's School, Horsham and Durham University. After a period of teaching in the North East he moved to London in 1975, since when he has worked as a freelance historian and editor. He now lives in East Oxford.

'Let me say straight away, how much I welcome this volume. During the past fifty or so years, the number of authors contributing to the critical study of Gilbert White has been extremely few....Dadswell's volume will be of value to the student of White, to the historian of natural history, as also to the behavioural researcher. It is, to use an eighteenth-century term, a performance of merit.' Archives of Natural History 'Digests with a multiplicity of reference sources easily become a word jungle with little lucid flow. Ted Dadswell expertly avoids this problem, and although his book reflects in part a personal journey, his own views embellish an intriguing analysis, assisting in producing a fascinating and readable text. Recommended equally to Selborne devotees and to newcomers.' Ibis '... a valuable addition to the bookshelf of anyone with an interest in the remarkable curate of Selborne.' The Selborne Society Newsletter 'For anyone interested in the writings of Gilbert White, this would make a fascinating read.' Bird Study 'Dadswell gives the reader a warm sense of place.' Isis

The Selborne Pioneer: Gilbert White as Naturalist and Scientist: A Re-Examination