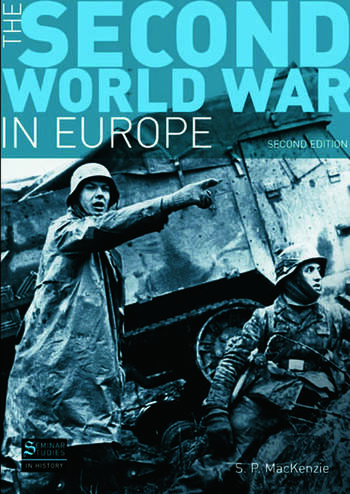 This is an updated edition of the first truly concise introduction to the history of World War II in the West. The author, S. P. MacKenzie traces the major events on both fighting front and home front, explaining what happened and, just as importantly, why the balance of fortunes swung first towards the Axis and then towards the Allies. Along with overviews of the origins and consequences of the conflict, the book:

Far from being a blow-by-blow account, the book shows how the Second World War can only be understood by taking all the contributing factors - military, economic and social among others - into account. In addition to the existing wealth of useful supplementary material, this edition has been updated to include a colour illustration section and, for readers interested in learning more, a detailed narrative guide to published historical literature. Admirably succinct yet academically rich, this is the essential introduction to the Second World War in the West.

Strategies for Survival and Expansion, 1940–41

Economies and Societies at War

Barbarism and the Holocaust

Strategic Bombing and the U-Boat War

6. THE END OF THE WAR AND AFTER

Costs and the Division of Europe

is Professor of History at the University of South Carolina. He teaches military history and modern European history, with special emphasis on the linkages between war and society. Professor MacKenzie teaches both undergraduate and graduate courses on the evolution of warfare as well as Britain and Continental Europe in the modern period. His publications include: The Colditz Myth: British and Commonwealth Prisoners of War in Nazi Germany; British War Films, 1939-1945: The Cinema and the Services; Revolutionary Armies in the Modern Era: A Revisionist Approach; The Home Guard: A Military and Political History; Politics and Military Morale: Current-Affairs and Citizenship Education in the British Army, 1914-1950 .