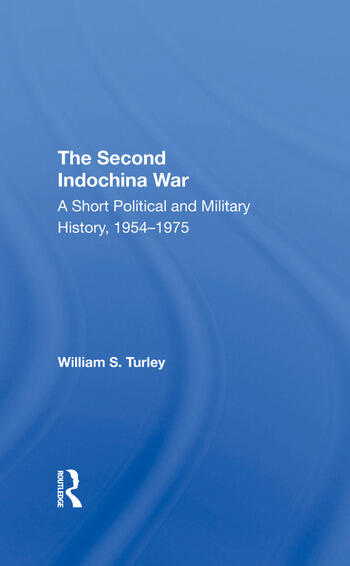 The Second Indochina War: A Short Political And Military History, 19541975

In the United States, discussion of the Vietnam War has tended to focus on the U.S. role, U.S. strategy, U.S. diplomacy, and the war's effects on American society. The tendency to hold U.S. domestic politics responsible for the war's outcome implies that events in Indochina were nothing more than a backdrop for an essentially American drama. In contrast, The Second Indochina War emphasizes the Vietnamese dimensions of a conflict in which all of Indochina—Vietnam, Laos, and Cambodia—was treated as a single strategic unit. The author contends that only from this perspective is it clear how the war began, why its scale outstripped U.S. expectations, and why the Communists prevailed. Professor Turley gives a balanced account of events in, and views from, Washington, Saigon, and Hanoi. Drawing on years of research in primary documents and interviews conducted by the author in Saigon and Hanoi, the book focuses on the experience, strategies, leadership, and internal politics of the revolutionary side. To set the scene, the author considers the legacies of colonial rule in Indochina and the origins of the U.S. commitment there. He recounts the development of the Saigon regime and explains the bases of revolution in the South, the key communist decisions, and the North's response to bombing. The major military campaigns are clearly described and analyzed, as are the negotiations that led to the Paris Agreement and its aftermath. Vietnam is the central focus, but the reader's attention is also drawn to the strategies and events that unified the conflict in all three countries of Indochina into a single war. Concise yet comprehensive, The Second Indochina War is suitable for the general reader, as a text for courses on the war, or as supplementary reading for courses on Southeast Asian politics, U.S. foreign policy, revolutionary conflict, and Asian regional security. An annotated bibliography and chronology enhance its usefulness. Original material on communist internal debates and military campaigns, based on primary documents in Vietnamese, will also make this book a valuable resource for scholars of Southeast Asia.

William S. Turley, associate professor of political science at Southern Illinois University, has been researching Vietnamese communism since 1970, including extensive work in Vietnam. He has spent time in Southeast Asia as a Ford Foundation Research Associate at Saigon University (1972-1973) and a Fulbright Professor at Chulalongkorn University, Bangkok (1982-1984); his numerous publications include Vietnamese Communism in Comparative Perspective (Westview 1980).

The Second Indochina War: A Short Political And Military History, 19541975