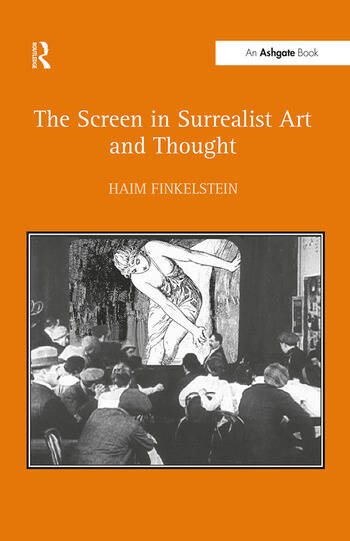 The Screen in Surrealist Art and Thought

An interrogation of the notion of space in Surrealist theory and philosophy, this study analyzes the manifestations of space in the paintings and writings done in the framework of the Surrealist Movement. Haim Finkelstein introduces the 'screen' as an important spatial paradigm that clarifies and extends the understanding of Surrealism as it unfolds in the 1920s, exploring the screen and layered depth as fundamental structuring principles associated with the representation of the mental space and of the internal processes that eventually came to be linked with the Surrealist concept of psychic automatism. Extending the discussion of the concepts at stake for Surrealist visual art into the context of film, literature and criticism, this study sheds new light on the way 'film thinking' permeates Surrealist thought and aesthetics. In early chapters, Finkelstein looks at the concept of the screen as emblematic of a strand of spatial apprehension that informs the work of young writers in the 1920s, such as Robert Desnos and Louis Aragon. He goes on to explore the way the spatial character of the serial films of Louis Feuillade intimated to the Surrealists a related mode of vision, associated with perception of the mystery and the Marvelous lurking behind the surfaces of quotidian reality. The dialectics informing Surrealist thought with regard to the surfaces of the real (with walls, doors and windows as controlling images), are shown to be at the basis of André Breton's notion of the picture as a window. Contrary to the traditional sense of this metaphor, Breton's 'window' is informed by the screen paradigm, with its surface serving as a locus of a dialectics of transparency and opacity, permeability and reflectivity. The main aesthetic and conceptual issues that come up in the consideration of Breton's window metaphor lay the groundwork for an analysis of the work of Giorgio de Chirico, René Magritte, Max Ernst, André Masson, and Joan Miró. The concluding chapter considers several issues that dominate the Surrealist spatiality in the 1930s. Derived from the various spatial concepts associated with the screen paradigm, at times in contradistinction to them, these issues, as the author argues, reflect a gradual eclipse of the screen paradigm in the early years of the decade.

Haim Finkelstein holds the Evelyn Metz Chair in Art History at Ben-Gurion University of the Negev, Israel. His book Surrealism and the Crisis of the Object was published in 1980; his more recent books include two volumes devoted to Dalí­, Salvador Dalí­'s Art and Writing 1927-1942 (1996), and a critical edition of his shorter writings, The Collected Writings of Salvador Dalí (1998). His current research focuses on the notion of space in Surrealist film.

’This publication is a fascinating study of the deeper implications of cinema and the screen for Surrealist theory and philosophy.’ Arlis

’Haim Finkelstein's latest publication follows a line of impeccably researched, scholarly works from the author. This fascinating and erudite book proposes a reading of European Surrealism of the 1920s and 1930s which claims the screen as a dominant conceptual paradigm for the movement.’ The Art Book

’One of Haim Finkelstein’s achievements in this book is to articulate the link between surrealist experiences and everyday experience. The book does a particularly fine job of examining how the former are located on the threshold of the latter; it shows, indeed, that what separates surrealism from conventional understandings of realism may be little more than a permeable screen. Finkelstein has produced a rich and fascinating reading of the surrealist movement during the 1920s. ...All in all, The Screen in Surrealist Art and Thought makes a valuable contribution to the study of surrealism and its place in twentieth-century culture. It can be read with profit by not only art, literary and cultural historians, but by anyone concerned with the effects of technological and cultural modernity on the human imagination.’ H-France Review

The Screen in Surrealist Art and Thought