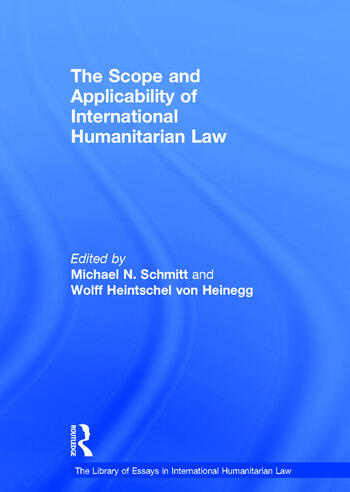 The Scope and Applicability of International Humanitarian Law

Contents: Introduction, Wolff Heintschel von Heinegg; The concept of war in modern international law, Christopher Greenwood; The different types of armed conflicts according to the Geneva Conventions and Protocols, Dietrich Schindler; Humanitarian law and armed conflicts: toward the definition of 'international armed conflict', Tom Farer; Internationalized non-international armed conflicts: case studies of Afghanistan, Kampuchea, and Lebanon, Hans-Peter Gasser; The problem of the revision of the law of war, H. Lauterpacht; The nature and scope of the Armistice agreement, Howard S. Levie; Armistices and other forms of suspension of hostilities, R.R. Baxter; The limits of the operation of the law of war, H. Lauterpacht; The relationship between ius ad bellum and ius in bello, Christopher Greenwood; The equal application of the laws of war: a principle under pressure, Adam Roberts; The present status of neutrality, Quincy Wright; International law and contemporary naval operations, D.P. O'Connell; Human rights and humanitarian law, Dietrich Schindler; International humanitarian law and human rights law, Louise Doswald-Beck and Sylvain Vité; The relationship between international humanitarian law and human rights law from the perspective of a human rights treaty body, Francoise J. Hampson; Counter-terrorism, armed force and the laws of war, Adam Roberts; Use and abuse of the laws of war in the 'war on terrorism', Marco SassÃ²li; Name index.

The Scope and Applicability of International Humanitarian Law