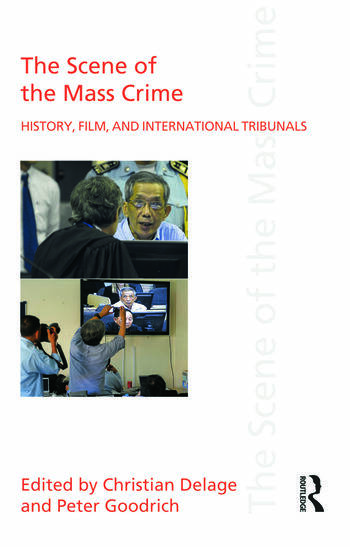 The Scene of the Mass Crime: History, Film, and International Tribunals

The Scene of the Mass Crime takes up the unwritten history of the peculiar yet highly visible form of war crimes trials. These trials are the first and continuing site of the interface of law, history and film. From Nuremberg to the contemporary trials in Cambodia, film, in particular, has been crucial both as evidence of atrocity and as the means of publicizing the proceedings. But what does film bring to justice? Can law successfully address war crimes, atrocities, genocide? What do the trials actually show? What form of justice is done, and how does it relate to ordinary courts and proceedings? What lessons can be drawn from this history for the very topical political issue of filming civil and criminal trials? This book takes up the diversity and complexity of these idiosyncratic and, in strict terms, generally extra-legal medial situations. Drawing on a fascinating diversity of public trials and filmic responses, from the Trial of the Gang of Four to the Gacaca local courts of Rwanda to the filmic symbolism of 9-11, from Soviet era show trials to Nazi People's Courts leading international scholars address the theatrical, political, filmic and symbolic importance of show trials in making history, legitimating regimes and, most surprising of all, in attempting to heal trauma through law and through film. These essays will be of considerable interest to those working on international criminal law, transitional justice, genocide studies, and the relationship between law and film.

1. History, Trauma, War Crimes: Pieter Lagrou: Getting the Past Right—or the Future?; William A. Schabas: Building the Official Narrative; Henry Rousso: Competitive Narratives: An Incident at the Papon Trial; Hélène Dumas: Gacaca courts in Rwanda: A Local Justice for a Local Genocide history?; 2. Show Trials: Nicolas Werth: The Raion Trials in the USSR (1937-1938); Anne Kerlan: The Trial of the ‘Gang of the Four’; Johann Chapoutot: The Nazi People’s Court (1944) or the Failure of "Total Justice"; Stuart Liebman: The Majdanek Trial. The Holocaust on Trial on Film: Kazimierz Czyński’s Swastyka i Szubienica (1945); 3. Khmer Rouge on Trial: Françoise Sironi: The Psychological Evaluation of Duch, A Criminal Against Humanity in Cambodia; François Roux: Pleading guilty: the case of Duch in the Khmer Rouge trial. Defending Duch; Brice Poirier: The Place and Participation of the Victims in Duch’s Trial; 4. September 11, 1973/2001: Hollywood, Figures and Film;Vincent Dozol: Hollywood: Previsualization and post 9-11 style?; Constance Ortuzar: The 9-11: The Chilean Coup and its Visual Memory; Christian Delage:Visualizing 9-11; Portfolio: Peter Goodrich and Linda Mills, Edward Hillel, Richard Sherwin

Peter Goodrich is Professor of Law and Director of the Program in Law and Humanities, Cardozo School of Law, New York. He has authored ten books on legal theory, psychoanalysis, law and the visual.

Christian Delage is a professor at the University of Paris 8. He also teaches at the École des hautes études en sciences sociales and at Sciences Po Paris, and is a regular professor at the Benjamin N. Cardozo School of Law.

The Scene of the Mass Crime: History, Film, and International Tribunals