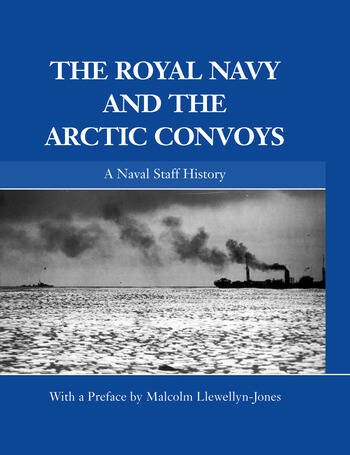 The Royal Navy and the Arctic Convoys: A Naval Staff History

Published here for the first time, this volume presents a superb range of insights into this crucial effort of the Second World War.

This Naval Staff History describes the vital role of the Arctic Convoys, 1941-1945 and was first issued by the Historical Section of the Admiralty as a confidential study for use within the Royal Navy in 1954. It grew out of the earlier Battle Summary No. 22 compiled by Commander J. Owen of the Admiralty’s Historical Section and issued in 1943 to cover the convoys run to North Russia in the last half of 1942 and early 1943. That wartime Battle Summary was subsequently revised and expanded by Commander L.J. Pitcairn-Jones to include all the main convoys run from August 1941 until the end of the war using all the historical records which were at hand after the war.

A new preface provides additional context for the convoys, highlighting support provided to Russian forces in their struggle against Germany, for the original Staff History was narrowly focused on the naval aspects of the Arctic Convoys to Russia.

This is an excellent resource for all students with a particular interest in the Arctic Convoys, the Second World War and in maritime and military history.

Malcolm Llewellyn-Jones served for 26 years in the Fleet Air Arm, subsequently completing his PhD at King’s College, London. He is a historian in the Naval Historical Branch, MoD. He regularly lectures and has published on many aspects of anti-submarine and joint warfare.

"In sum, this is a keeper. It remains the only comprehensive - albeit dated - monograph on the Arctic convoys, a primary source in its own right and an important addition to any library on the war at sea from 1939 to 1945. The beautifully reproduced colour charts of battles - bound into the text so they will not go adrift in a libary collection - alone almost justify the price.  The book is highly recommended." - Marc Milner, University of New Brunswick, International Journal of Maritime History

The Royal Navy and the Arctic Convoys: A Naval Staff History