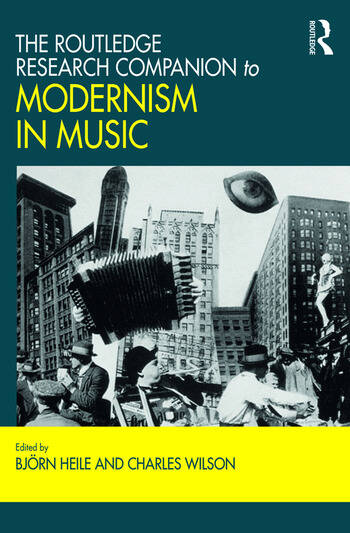 The Routledge Research Companion to Modernism in Music

Modernism in music still arouses passions and is riven by controversies. Taking root in the early decades of the twentieth century, it achieved ideological dominance for almost three decades following the Second World War, before becoming the object of widespread critique in the last two decades of the century, both from critics and composers of a postmodern persuasion and from prominent scholars associated with the ‘new musicology’. Yet these critiques have failed to dampen its ongoing resilience. The picture of modernism has considerably broadened and diversified, and has remained a pivotal focus of debate well into the twenty-first century. This Research Companion does not seek to limit what musical modernism might be. At the same time, it resists any dilution of the term that would see its indiscriminate application to practically any and all music of a certain period.

In addition to addressing issues already well established in modernist studies such as aesthetics, history, institutions, place, diaspora, cosmopolitanism, production and performance, communication technologies and the interface with postmodernism, this volume also explores topics that are less established; among them: modernism and affect, modernism and comedy, modernism versus the ‘contemporary’, and the crucial distinction between modernism in popular culture and a ‘popular modernism’, a modernism of the people. In doing so, this text seeks to define modernism in music by probing its margins as much as by restating its supposed essence.

1: The Birth of Modernism – Out of the Spirit of Comedy James R. Currie

5: Musical Modernity, the Beautiful and the Sublime Edward Campbell

10: Modernism for and of the Masses? On Popular Modernisms Stephen Graham

11: Times Like the Present: De-limiting Music in the Twenty-First Century Charles Wilson

13: How Does Modernist Music Make You Feel? Between Subjectivity and Affect Trent Leipert

16: The Balinese Moment in the Montreal New Music Scene as a Regional Modernism Jonathan Goldman

18: Contemporary Opera and the Failure of Language Amy Bauer

20: The Modernism of the Mainstream: An Early Twentieth-Century Ideology of Violin Playing Stefan Knapik

Björn Heile is Professor of Music (post-1900) at the University of Glasgow. He is the author of The Music of Mauricio Kagel (Ashgate, 2006), the editor of The Modernist Legacy: Essays on New Music (Ashgate, 2009), co-editor (with Martin Iddon) of Mauricio Kagel bei den Darmstädter Ferienkursen für Neue Musik: Eine Dokumentation (2009) and co-editor (with Peter Elsdon and Jenny Doctor) of Watching Jazz: Encountering Jazz Performance on Screen (2016), plus many other publications on new music, experimental music theatre and jazz. Among other projects, he is trying to write a book on the global history of musical modernism.

Charles Wilson was Senior Editor for twentieth-century composers on the second edition of the New Grove Dictionary of Music and Musicians, and currently lectures at the School of Music, Cardiff University. He served as Editor-in-Chief (2009–12) of the journal Twentieth-Century Music. His research focuses on the relationship between historiography and practice (both personal and institutional) in the art music of the twentieth and twenty-first centuries.

The Routledge Research Companion to Modernism in Music