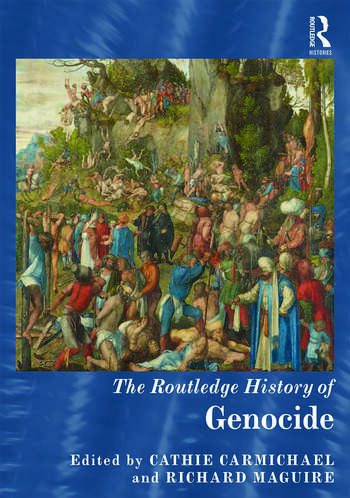 The Routledge History of Genocide

The Routledge History of Genocide takes an interdisciplinary yet historically focused look at history from the Iron Age to the recent past to examine episodes of extreme violence that could be interpreted as genocidal. Approaching the subject in a sensitive, inclusive and respectful way, each chapter is a newly commissioned piece covering a range of opinions and perspectives. The topics discussed are broad in variety and include:

The volume is global in scope, something of increasing importance in the study of genocide. Presenting genocide as an extremely diverse phenomenon, this book is a wide-ranging and in-depth view of the field that will be valuable for all those interested in the historical context of genocide.

Cathie Carmichael is Professor of History at the University of East Anglia and has been Head of School since 2012.  She is the author and editor of several books including Slovenia and the Slovenes: A Small State in the New Europe (2000) (with James Gow), Language and Nationalism in Europe (2000) (co-edited with the late Stephen Barbour), Ethnic Cleansing in the Balkans: Nationalism and the Destruction of Tradition (2002) and Genocide before the Holocaust (2009). She is an editor of the Journal of Genocide Research.

is Associate Dean for Employability and Senior Lecturer in Public History in the Faculty of Humanities at the University of East Anglia. He has written on the culture of British nuclear policy and now researches public history, focussing on public understandings of African and military history.

"One of this impressive volume's many virtues is the inclusion of little-known cases along with coverage of the twentieth century's mega-genocides by experts from many countries. This is a standout volume in an increasingly crowded field."

"It is time to further explore genocide in its global scope. This brilliant collection of essays comes right in time: From Siberia to Australia, from Los Alamos to Srebrenica, this volume presents genocide as a phenomenon in its full diversity and its global spread."

"Using the concept of "genocide" as a broad category of analysis, the essays in this volume address important questions about the history of mass violence around the globe. Revealing the historical, geographical, and ideological variety of genocidal acts — and highly attuned to the complexity of this sensitive subject — the book offers valuable insights into the history of violence and will be useful for researchers and teachers in a wide range of fields."

The Routledge History of Genocide