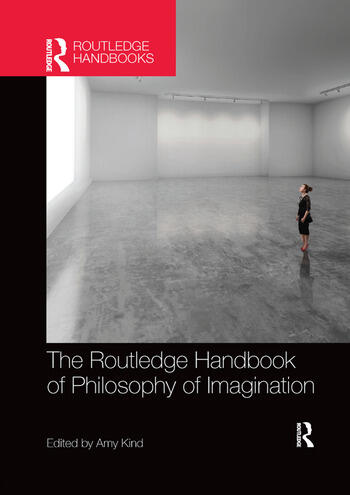 The Routledge Handbook of Philosophy of Imagination

Imagination occupies a central place in philosophy, going back to Aristotle. However, following a period of relative neglect there has been an explosion of interest in imagination in the past two decades as philosophers examine the role of imagination in debates about the mind and cognition, aesthetics and ethics, as well as epistemology, science and mathematics.

This outstanding Handbook contains over thirty specially commissioned chapters by leading philosophers organised into six clear sections examining the most important aspects of the philosophy of imagination, including:

The Routledge Handbook of Philosophy

of Imagination is essential reading for students and researchers in philosophy of mind and psychology, aesthetics, and ethics. It will also be a valuable resource for those in related disciplines such as psychology and art.

Part 4: Imagination in Philosophy of Mind and Cognitive Science

20. Imagination and the Self Dilip Ninan

27. Empathy and the Imagination Karsten Stueber

28. The Ethics of Imagination and Fantasy Aaron Smuts

'Kind provides a thorough, comprehensive treatment of the philosophy of imagination. … With its 34 well-researched and well-written essays, this volume will be an excellent resource for those interested in this central mental function of life and philosophical theorizing. Summing Up: Highly recommended.' - P. Jenkins, Marywood University, CHOICE

'Finally! A comprehensive and multifaceted guide to the philosophy of imagination; one that brings together leading contemporary accounts, historical perspectives, and discussion of problems in many different areas of philosophy. A great achievement by Amy Kind, and an essential reference text.' - Katherine Thomson-Jones, Oberlin College, USA

'With the breadth of its coverage and quality of its scholarship, this Handbook surely deserves to become the definitive reference source on the philosophy of the imagination for years to come. It stands as an excellent reminder of the fact that the imagination is a notion we all, regardless of our specialisations, must make room for.' - Elisabeth Schellekens Dammann, Uppsala University, Sweden

'A breath-taking journey into the realm of Imagination, and an extremely useful addition to the current literature. Following an excellent and articulate Introduction, the chapters in this book are a valuable compass for the reader who wants to orient herself within such a vast literature.' - Margherita Arcangeli, University of Geneva, Switzerland

The Routledge Handbook of Philosophy of Imagination