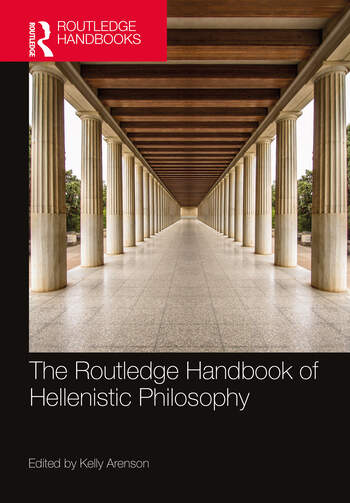 Hellenistic philosophy concerns the thought of the Epicureans, Stoics, and Skeptics, the most influential philosophical groups in the era between the death of Alexander the Great (323 BCE) and the defeat of the last Greek stronghold in the ancient world (31 BCE).

provides accessible yet rigorous introductions to the theories of knowledge, ethics, and physics belonging to each of the three schools. It explores the fascinating ways in which interschool rivalries shaped the philosophies of the era, and offers unique insight into the relevance of Hellenistic views to issues today, such as environmental ethics, consumerism, and bioethics. Eleven countries are represented among the Handbook’s thirty-five authors, whose chapters were written specifically for this volume and are organized thematically into six sections:

I. The people, history, and methods of Epicureanism, Stoicism, and Skepticism.

II. Earlier philosophical influences on Hellenistic thought, such as Aristotle, Socrates, and Presocratics.

III. The soul, perception, and knowledge.

IV. God, fate, and the primary principles of nature and the universe.

Spanning from the ancient past to the present, this Handbook aims to show that Hellenistic philosophy has much to offer all thinking people of the twenty-first century.

Part I: Methods and Background

2. The Stoics and their Philosophical System  William O. Stephens

9. Socratic Ignorance and Ethics in the Stoa  René Brouwer

12. The Stoic Theory of the Soul  Tamer Nawar

14. Epicurus on Sense-Experience and the Fear of Death  Emily Austin

16. Skeptical Responses to Stoics and Epicureans on the Criterion  Scott Aikin

17. Epicureans on What There Is  Jan Maximilian Robitzsch

20. Stoics and Epicureans on Language and the World  Catherine Atherton

21. Free Will and Fate in Carneades’ Academic Skepticism  James Allen

22. Piety and Theology in the Stoics, Epicureans, and Pyrrhonian Skeptics  Harald Thorsrud

23. Tranquility as the Goal in Pyrrhonian Skepticism  Casey Perin

24. Epicureans on Pleasure, Desire, and Happiness  Benjamin A. Rider

26. The Medicine of Salvation: Epicurean Education as Therapy  Michael McOsker

28. Academic Skeptics and Stoics on "Trying Your Best" and the Ultimate End of Action  Christiana Olfert

35. Hellenistic Philosophy and the Origins of Economic Thought  Phillip Mitsis

Kelly Arenson is Assistant Professor of Philosophy at Duquesne University. She is the author of Health and Hedonism in Plato and Epicurus (2019).