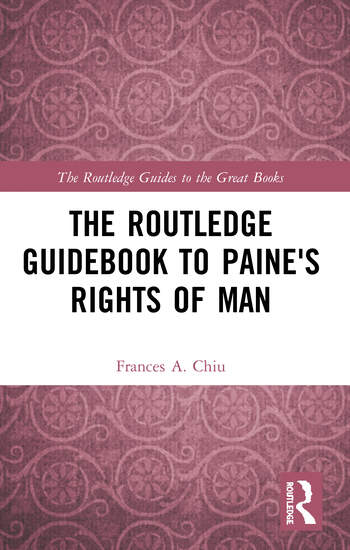 The Routledge Guidebook to Paine's Rights of Man

Upon publication in 1791-92, the two parts of Thomas Paineâ€™s Rights of Man proved to be both immensely popular and highly controversial. An immediate bestseller, it not only defended the French revolution but also challenged current laws, customs, and government.

The Routledge Guidebook to Paineâ€™s Rights of Man

provides the first comprehensive and fully contextualized introduction to this foundational text in the history of modern political thought, addressing its central themes, reception, and influence. The Guidebook examines:

The Routledge Guidebook to Paineâ€™s Rights of Man

is essential reading for students of eighteenth-century American and British history, politics and philosophy, and anyone approaching Paineâ€™s work for the first time.

Frances A. Chiu teaches history and literature at the New School in New York, USA. She is a graduate of Smith College (A.B.), Northwestern University (M.A.), and Oxford University (Ph.D.).

The Routledge Guidebook to Paine's Rights of Man