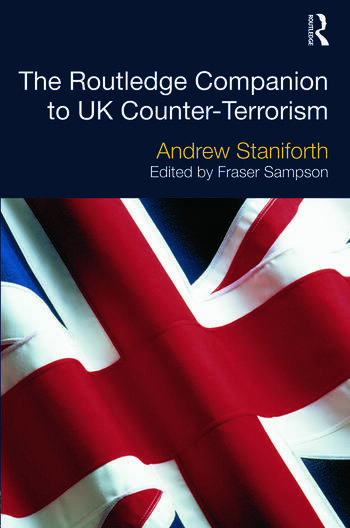 The Routledge Companion to UK Counter-Terrorism

The United Kingdom has long been an island under siege from terrorists who believe they can advance their aims through acts of violence. Protecting the public from the excesses of extremism remains the primary responsibility of government. For over a century Special Branch, MI5 and MI6 have prevented terrorist atrocities and have pursued those who wish to destroy the United Kingdom’s free and democratic way of life. Yet, despite developing one of the world’s most sophisticated security architectures, successful terrorist attacks have occurred with alarming regularity.

For the very first time, this new volume explores the evolution of counter-terrorism practice in the United Kingdom, brought to life with dramatic case studies and personal insider accounts provided by leading policy makers, prosecutors and counter-terrorism practitioners who openly reveal the challenges and operational reality of countering contemporary terrorist threats. From the troubles in Northern Ireland to the al Qa’ida inspired genre of international terrorism, this volume plots the trajectory of counter-terrorism policy and practice exploring the events that have served to change the course of civil protection.

This unique title is enriched by leading academic perspectives providing analysis of counter-terrorism responses and identifies lessons to be learned from the past, the present, as well as exploring the terrorist threats of the future to be tackled by the next generation of counter-terrorism practitioners. This accessible and authoritative volume is required reading for all in authority and academia who are concerned with national security, counter-terrorism and the law, as well as those with a vested interest in the preservation of human rights, the protection of civil liberties and democracy itself.

Fraser Sampson is Chief Executive and Solicitor for the West Yorkshire Police Authority. He was the founding author of Blackstone's Police Manuals (Oxford University Press, 2009) and Blackstone's Preparing for Police Duty (Oxford University Press, 2010) and is the editor of Blackstone's Police Operational Handbook. Fraser is a Visiting Fellow at the University of Leeds Centre for Criminal Justice Studies and an Associate of the Scottish Institute for Policing Research as well as being the Chair of the Association for Policing and Crime Chief Executives. He has written and spoken widely on the subject of police law and governance and is a recognised authority in this area.

The scope of this book is extremely enriching. Some of UK leading counter-terrorism practitioners and world-renowned researchers were brought together to share their knowledge on what is arguably one decade of many years of New Era global terrorism. The book is insightful and informative, not too short of an encyclopaedia of counter-terrorism practices and responses.

The Routledge Companion to UK Counter-Terrorism