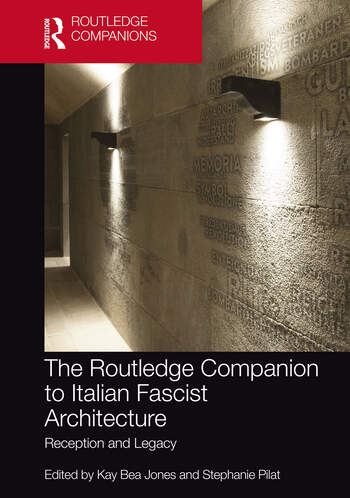 The Routledge Companion to Italian Fascist Architecture: Reception and Legacy

Available for pre-order. Item will ship after May 26, 2020
Add to Wish List
FREE Standard Shipping!

Today, nearly a century after the Fascist Party came to power in Italy, questions about the built legacy of the regime provoke polemics among architects and scholars. Mussolini’s government constructed thousands of new buildings across the Italian peninsula and islands, and in colonial territories. From hospitals, post offices and stadia, to housing, summer camps, Fascist Party headquarters, ceremonial spaces, roads, railways and bridges, the physical traces of the regime have a presence in nearly every Italian town.

The Routledge Companion to the Reception of Italian Fascist Architecture

investigates what has become of the architectural and urban projects of Italian Fascism, how sites have been transformed or adapted, and what constitutes the meaning of these buildings and cities today. Essays include a rich array of new arguments by both senior and early career scholars from Italy and beyond. They examine the reception of fascist architecture through studies of destruction and adaptation, debates over re-use, artistic interventions, and even routine daily practices, which may slowly alter collective understandings of such places. Paolo Portoghesi sheds light on the subject from his internal perspective, while Harald Bodenschatz situates Italy among period totalitarian authorities and their symbols across Europe. Section editors frame, synthesize and moderate essays that explore Fascism’s afterlife; how the physical legacy of the regime has been altered and preserved and what it means now. This critical history of interpretations of fascist-era architecture and urban projects broadens our understanding of the relationships among politics, identity, memory and place.

This Companion will be of interest to students and scholars in a range of fields including: Italian history, architectural history, cultural studies, visual sociology, political science and art history.

Kay Bea Jones is Professor of Architecture at the Austin E. Knowlton School of Architecture at Ohio State University. She is an affiliated Adjunct Professor in Italian Studies, Department of French and Italian. She initiated the KSA/OSU Study Abroad Program in Italy in 1985.

Jones studies topics in modern italian architecture, design and urbanism. Following her publication of Suspending Modernity: The Architecture of Franco Albini (2014), her essays, lectures and exhibition on Albini, Franca Helg, and Caterina Marcenaro from furniture to museums and urban design have been included in Italian and international venues. As 2018-19 U.S. Fulbright Scholar to Italy, Jones taught at the University of Trento while working on research investigating the architecture of Adriano Olivetti and his Ivrea community. Her work on the Olivetti’s impact on modern Italy began with her Bogliasco Fellowship and residency in 2015.

In her design practice, Jones works on the architecture and assessment of housing and urban agriculture innovations, especially as American market alternatives. Her co-housing initiative for low-income single parent families resulted in The Buckeye Village Community Center (2006) which received recognition from the EDRA Design Award and both state and local AIA honor awards.

is a designer and architectural historian whose teaching and research examines points of intersection between politics and architecture. Pilat is the author of Reconstructing Italy: The Ina-Casa Neighborhoods of the Postwar Era, which tells the story of an Italian postwar housing program that activated the design and construction process for social aims. The book was awarded the 2015 Helen and Howard R. Marraro Prize for the best work on Italian history by the Society for Italian Historical Studies. Her research has been supported by the Wolfsonian, the Fulbright, the American Association of University Women, and the American Academy in Rome. In 2015, Pilat was named as one of the "30 most admired educators" in the nation by DesignIntelligence magazine. Pilat is an Associate Professor and Director of the Division of Architecture at the University of Oklahoma.

The Routledge Companion to Italian Fascist Architecture: Reception and Legacy