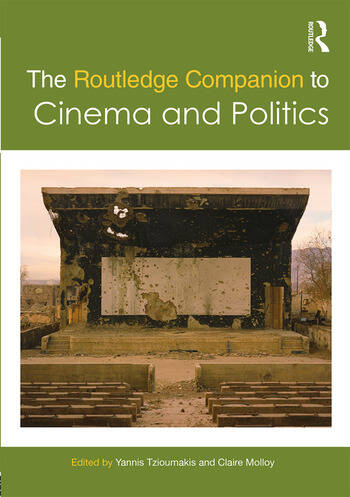 The Routledge Companion to Cinema and Politics

The Routledge Companion to Cinema and Politics brings together forty essays by leading film scholars and filmmakers in order to discuss the complex relationship between cinema and politics.

Organised into eight parts – Approaches to Cinema and Politics; Cinema, Activism and Opposition; Film, Propaganda, Ideology and the State; The Politics of Mobility; Political Hollywood; Alternative and Independent Film and Politics; The Politics of Cine-geographies and The Politics of Documentary – this collection covers a broad range of topics, including: Third Cinema, cinema after 9/11, eco-activism, human rights, independent Chinese documentary, film festivals, manifestoes, film policies, film as a response to the post-2008 financial crisis, Soviet propaganda, the impact of neoliberalism on cinema, and many others.

This Companion foregrounds the key debates, concepts, approaches and case studies that critique and explain the complex relationship between politics and cinema, discussing films from around the world and including examples from film history as well as contemporary cinema. It also explores the wider relationship between politics and entertainment, examines cinema’s response to political and social transformations and questions the extent to which filmmaking itself is a political act.

Approaches to Film and Politics

The Dialectics of Third Cinema

The Politics of Form: A Conceptual Introduction to ‘Screen Theory’

Revisiting the Political Economy of Film

Animal Rights Films, Organized Violence, and the Politics of Sight

Film and the Politics of Working Class Representation: The Inside Film Project

Kony 2012: Anatomy of A Campaign Video and A Video Campaign

Film, Propaganda, Ideology and the State

Between "Information" and "Inspiration": The Office of War Information, Frank Capra’s Why We Fight series and US World War II Propaganda

Striving for the Maximum Appeal: Ideology and Propaganda in the Soviet Cinema of the 1920s and 1930s

The Politics of Mobility

Cosmopolitanism, Empathy and the Close-up

Regurgitated Bodies: Presenting and Representing Trauma in The Act of Killing

After Dispossession: Blackfella Films and the Politics of Radical Hope

Reassertions of Hollywood Heroic Agency in the Iraq War Film

Spectacle vs. Narrative: Action Political Movies in the New Millennium

Reaganite Cinema: What a Feeling!

Alternative and Independent Film and Politics

Dismantling the System from Within: The Early Films of Robert Altman and the Politics of Anti-Establishment

The Way of Seeming

African Cinema in an Age of Postcolonialism and Globalization

Political Cinema in Latin America: From Nation-building to Cultural Translation

Minor Cinema – The Case of Wales

The Politics of Documentary

Documenting Dissent: Political Documentary in the People’s Republic of China

Politics and Independence: Documentary in Greece during the Crisis

Interactive Documentary: Film and Politics in the Digital Era

Yannis Tzioumakis is Senior Lecturer in Communication and Media Studies at the University of Liverpool. He is the author and editor of six books, most recently of Hollywood’s Indies: Classics Divisions, Specialty Labels and the American Film Market (2012). He is also co-editor of the ‘Hollywood Centenary’ and the ‘Cinema and Youth Cultures’ book series (both for Routledge).

is Professor of Film, Television and Digital Media, and Director of the Centre for Human Animal Studies at Edge Hill University. Her recent publications include the books Memento (2010), Popular Media and Animals (2011), Beyond Human: From Animality to Transhumanism (2012) and American Independent Cinema: Indie, Indiewood and Beyond (2013).

The Routledge Companion to Cinema and Politics