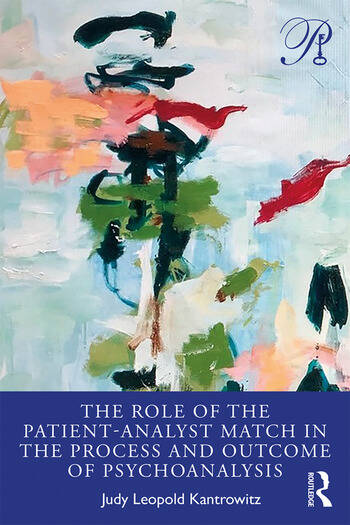 The match between patient and analyst places attention on the dynamic effect of interactions of character and conflict of both participants on the process that evolves between them - a spectrum of compatibility and incompatibility that is relevant to the analytic work. Classical psychoanalysis had been viewed as a ‘one-person’ enterprise, with one analyst interchangeable with another. Analysts’ experiences of countertransference reactions were viewed as unresolved conflicts, reasons to return to personal treatment, not inevitable and potentially informative about the current analytic work. This view began to shift in the 1980s, with Judy Kantrowitz’s work contributing to the development of the recognition that psychoanalysis was a ‘two-person’ process. In this collection of her most significant papers, Kantrowitz explores the importance of the match, which refers to observable styles, attitudes and personal characteristics that may be rooted in residual and unanalyzed conflicts, triggered in any patient-analyst pair. Match is neither a predictive nor static concept. Rather it refers to the unfolding transaction that itself that may shift and change during the course of analytic work.

Pulling together the history of the shift in theory from the one-person to two-person understanding of the psychoanalytic enterprise, The Role of the Patient- Analyst Match in the Process and Outcome of Psychoanalysis will be of great interest to contemporary psychoanalysts.

Judy Leopold Kantrowitz, PhD is a Training and Supervising analyst at the Boston Psychoanalytic Society and Institute. She has been an Associate Clinical Professor at Harvard Medical School and is currently a corresponding member. She is the author of three books, The Patient's Impact on the Analyst (1996) ; Writing about Patients: responsibilities, risks, and ramifications,(2006) and Myths of Termination: what patients can teach analyst about endings (2014).

"Comprised of papers written over three decades, this volume demonstrates both Kantrowitz’s prescience in her early attention to the intersubjective and the gradual evolution and refinement of her thought. Drawing upon the dual perspectives of research and clinical work, these papers provide an organizing structure within which such heterogeneous issues as patient-analyst match, impasse, and the impact of the analyst’s own life experiences may be understood. A wealth of detailed clinical examples bring the author’s ideas alive for the reader. The book is both a pleasure and an intellectually enriching experience to read."

"There have always been two people in the treatment room. Judy Kantrowitz, early in her work, corrected the imbalance of a "one-person" psychology, whereby only the patient's qualities determine the outcome. More recently, Kantrowitz focuses on a new imbalance, where the work may be dangerously analyst-centered. Her clarity about the fundamental analytic responsibility – "to remain inside and outside of the process" – enables her to tell the story of American psychoanalysis over the last fifty years, in a way that is both ardent and balanced, personal and scholarly. The Role of the Patient-Analyst Match is a treasure."

"Judy Kantrowitz demonstrates a whole new way of looking at an on-going treatment. With clear, comfortable language and vivid vignettes, Kantrowitz follows the configuration of the match not only into the areas we expect, such as impasses and supervision, but also such areas as the changes undergone by both analyst and patient in the course of the treatment, the handling of the frame, and even the impact of shaking events in the analyst’s life. Other than supporting the treatment objective, Kantrowitz has no axe of grind, is not a moralizer or a partisan. She is always sympathetic to both parties in treatment, and draws on relevant contributions from all psychoanalytic quarters. What she offers is subtle, experienced psychoanalytic empiricism and a broadened appreciation of what has been an uncomfortable area for practitioners."

"Judy Kantrowitz integrates in a unique and admirable way a research perspective in her clinical work as a psychoanalyst.Her work is characterised by originality, courage, scientific care, honesty and relentless self-reflection combined with professional sensitivity, human warmth and a deeply human interest in psychic suffering snd it's complex causes. During her psychoanalytic training in-the 1970’s, and against the prevailing zeitgeist of one person psychology she developed the intersubjective concept of the match between psychoanalyst and analysand. In the papers in this unique volume, this concept is constantly further developed, clinically deepened and linked with new experiences, reflections and observations on changing "zeitgeists" within and outside the psychoanalytic community: a deep source of inspiration for generations of psychoanalysts and researchers!"

"In a stunningly discerning report of the ever unique personal aspects of patient-analyst engagements, Judy Kantrowitz offers us one of the most wise and mature overviews of the psychoanalytic process I know. Her open-minded and deep scholarship is wed to a keen clinical sensitivity that transcends pluralistic partiality. As a result, she not only brings together our varied understandings but notably and most movingly extends them.

This is a master class in serious thinking about psychoanalysis as a therapy, about analytic inquiry as a personally touching study of how hard it is to be a person. It is also a pleasure to read. Reading this, I learned much, but I also was moved to hear the richness of the music of psychoanalysis freed from the static of partisanship. Kantrowitz is a maestro, and this work is a profound contribution."