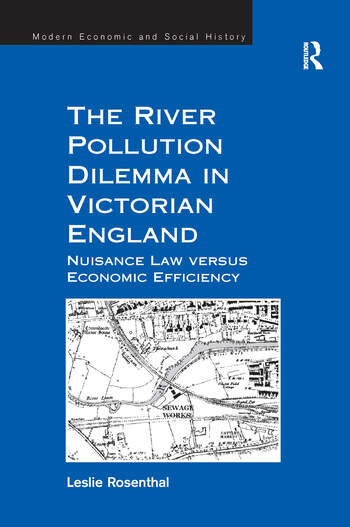 Nineteenth-century Britain witnessed a dramatic increase in its town population, as a hitherto largely rural economy transformed itself into an urban one. Though the political and social issues arising from these events are well-known, little is known about how the British legal process coped with the everyday strains that emerged from the unprecedented scale of these changes. This book explores the river pollution dilemma faced by the British courts during the second half of the nineteenth century when the legal process had to confront the new incompatible realities arising from the increasing amounts of untreatable waste flowing into the rivers. This dilemma struck at the heart of both Victorian urban and rural society, as the necessary sanitary reformation of the swelling cities and expanding industry increasingly poisoned the rivers, threatening the countryside and agricultural rents and livelihoods. Focusing on ten legal disputes, the book investigates the dilemma that faced the courts; namely how to protect the traditional and valued rights of landholders whose rivers and lands were being polluted by industrial waste and untreated sewage, whilst not hindering the progress of sanitary reform and economic progress in the towns. The case studies considered involve major industrialising centres, such as Birmingham, Leeds, Northampton, Wolverhampton and Barnsley, but also include smaller towns such as Tunbridge Wells, Leamington Spa and Harrogate. The fundamental issues raised remain as important today as they did in Victorian times. The need for the courts to balance a variety of conflicting needs and rights within the limits of contemporary technological capabilities often played out in surprising ways, with outcomes not always in line with theoretical expectations. As such the historical context of the disputes provide fascinating insights into nineteenth-century legal process, and the environmental and social attitudes of the times.

Leslie Rosenthal is Honorary Fellow at Keele University, having been Senior Lecturer in the Economics Department. He has published widely in academic journals, with his later research interests focused in the area of the economic analysis of the law.

'The River Pollution Dilemma in Victorian England, is a careful and scholarly work that will be of interest to anyone working at the intersection of economics, law, and public health, especially if they have an interest in public water and sewer systems. The author does an excellent job sketching out the relevant economics and then showing how history illustrates those economic principles. ... this is a fine book that addresses an important historical problem. It merits the serious attention of anyone working in the field.' EH.Net 'This book provides a good contribution to the field of urban environmental history. Scholars interested in urban metabolisms, the sanitary city, and Victorian environmental management will find it compelling reading. The River Pollution Dilemma not only focuses on the effects of the sanitary city on the land and rivers outside the urban boundaries but also shows how the consequences of these effects fed back into the towns’ management of their sewer systems.' H-Net ’Leslie Rosenthal’s ’stories of the sewers’ (p. xiv) are fascinating and written with a clarity of style that carries the reader effortlessly over some very murky ground; for this reviewer, at least, it constituted a goodread. Yet this is nopopular account of its subject, but a thoughtful and sober analysis of the problems involved in resolving the adverse environmental consequences of unregulatedand rapid urban development.’ Social History of Medicine ’...this is a fine study, with relevance to environmental policy-making past and present. One hopes it will stimulate other historians of the period to examine such cases similarly closely.’ Economic History Review