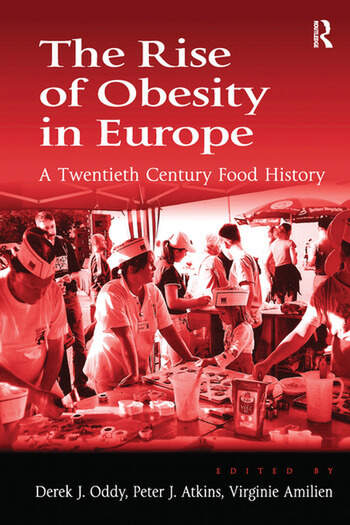 The Rise of Obesity in Europe: A Twentieth Century Food History

Twentieth century Europe went through a dramatic transition from low income populations experiencing hunger and nutritionally inadequate diets, to the recent era of over-consumption and growing numbers of overweight and obese people. By examining the trends in food history from case studies across Europe, this book offers a historical context to explain how and why this transition has occurred and what we can learn in order to try and address the vitally important issues arising from obesity in contemporary Europe.

Professor Derek J. Oddy is Professor Emeritus at the University of Westminster, UK. Professor Peter J. Atkins is Professor of Geography at Durham University, UK. Dr Virginie Amilien is a Senior Researcher at the National Institute for Consumer Research (SIFO) in Oslo, Norway

'This pioneering book deals with one of the biggest revolutions in humankind: the transition from under-nourishment to abundance which occurred in Europe during the twentieth century. The book tackles social, spatial and temporal disparities in nine European countries, addressing such diverse issues as social policy, agribusiness, and people’s dreams and fears.' Peter Scholliers, Vrije University Brussels, Belgium 'This edited volume with studies from 9 countries is a first attempt to analyse the food history of obesity in Europe, the long way to affluence. The book goes beyond the generalities and provides insight into the historical processes and trends of obesity in Europe.' Adel P. den Hartog, Wageningen University, The Netherlands '...a fascinating insight into the changing patterns of food consumption and perceptions of the body in 20th century Europe...a necessary contribution to the diverse history of Europe.' Anthropology of Food 'The book is divided into three parts: food consumption and consumer choice; industrial and commercial influences on food consumption; and social and medical influences. The chapters are crammed with information and case studies.' Nursing Standard '...a useful volume for anyone interested in the history of obesity, or European food history in the twentieth century.' Medical History

The Rise of Obesity in Europe: A Twentieth Century Food History