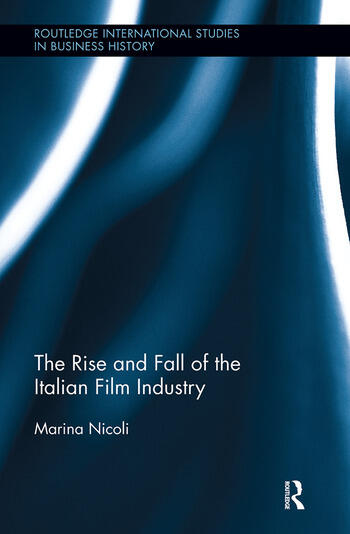 The Rise and Fall of the Italian Film Industry

Italian cinema triumphed globally in the 1960, with directors such as Rossellini, Fellini, and Leone, and actors like Sophia Loren and Marcello Mastroianni known to audiences around the world. But by the end of the 1980s, the Italian film industry was all but dead. The Rise and Fall of the Italian Film Industry traces the rise of the industry from its origins in the 19th century to its worldwide success in the 1960s, and its rapid decline in the subsequent decades. It does so by looking at cinema as an institution – subject to the interplay between the spheres of art, business, and politics at the national and international level.

By examining the roles of a wide range of stakeholders (including film directors, producers, exhibitors, the public, and the critics) as well as the system of funding and the influence of governments, author Marina Nicoli demonstrates that the Italian film industry succeeded when all three spheres were aligned, but suffered and ultimately failed when they each pursued contradictory objectives. This in-depth case study makes an important contribution to the long-standing debate about promoting and protecting domestic cultures, particularly in the face of culturally dominant and politically- and economically-powerful creative industries from the United States. The Rise and Fall of the Italian Film Industry will be of particular interest to business and economic historians, cinema historians, media specialists, and cultural economists.

Part 1: The Early Making of an Industry

1. The "Thinkability" of the Cinema: Is it Art or is it a Business?

Part 2: The Design of a "Powerful Weapon": Cinema under Fascism

3. The Visible Hand: A Way to the Cinematic Renaissance

5. Multiple Actors and the Re-Birth of an Industry

6. Entrepreneurial Efforts in the Worldwide Race

Marina Nicoli is a Post-Doctoral Research Fellow in the Department of Policy Analysis and Public Management at Bocconi University, Italy.

The Rise and Fall of the Italian Film Industry