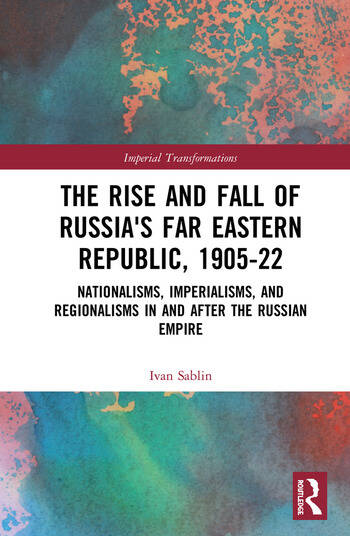 The Rise and Fall of Russia's Far Eastern Republic, 1905–1922: Nationalisms, Imperialisms, and Regionalisms in and after the Russian Empire

The Russian Far East was a remarkably fluid region in the period leading up to, during, and after the Russian Revolution. The different contenders in play in the region, imagining and working toward alternative futures, comprised different national groups, including Russians, Buryat-Mongols, Koreans, and Ukrainians; different imperialist projects, including Japanese and American attempts to integrate the region into their political and economic spheres of influence as well as the legacies of Russian expansionism and Bolshevik efforts to export the revolution to Mongolia, Korea, China, and Japan; and various local regionalists, who aimed for independence or strong regional autonomy for distinct Siberian and Far Eastern communities and whose efforts culminated in the short-lived Far Eastern Republic of 1920–1922. The Rise and Fall of Russia’s Far Eastern Republic, 1905–1922 charts developments in the region, examines the interplay of the various forces, and explains how a Bolshevik version of state-centered nationalism prevailed.

Chapter 3: Nationalisms and the making of the Far Eastern Republic, 1920

Chapter 4: The Far Eastern Republic and the Priamur State Formation, 1921

Chapter 5: Competing nationalisms and Sovietization in the Russian Far East, 1922

Ivan Sablin is a Research Group Leader in the Department of History, University of Heidelberg, Germany

The Rise and Fall of Russia's Far Eastern Republic, 1905–1922: Nationalisms, Imperialisms, and Regionalisms in and after the Russian Empire