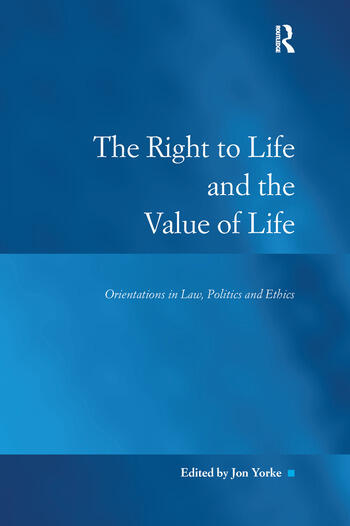 The Right to Life and the Value of Life: Orientations in Law, Politics and Ethics

This groundbreaking book is the first collection to investigate the law, political science and ethical perspectives collectively in relation to the right and value of life. Its contributions from international roster of scholars are organized around five themes: a theoretical positioning of life and death; War, armed conflict and detention; Death as punishment; Medical parameters for ending life; and medical policies for the preservation of life. In studying this issue in its contemporary contexts of "right" and "value," the volume fills the current scholarly lacuna in the general subject of the orientations of life. It presents a much-needed examination of key issues in a broad practical and theoretical context, and holds broad appeal for scholars, researchers, and students occupied with issues of war, armed conflict, the death penalty, and various contemporary medico-legal scenarios.

Contents: Introduction: the right to life and the value of life: orientations in law, politics and philosophy, Jon Yorke; Part I Approaching the Horizons of Life and Death: Politics and the philosophy of life: towards a normative framework, Mark Olssen; The exemplary exception: philosophical and political decisions in Giorgio Agamben's Homo Sacer, Andrew Norris; The value of life: somatic ethics and the spirit of biocapital, Nikolas Rose; How we value life: George Bailey and the life not worthy of being lived, Stephen Smith. Part II The Vicissitudes of Armed Conflict and Detention: The right to take life: killing and death in armed conflict, Agnieszka Jachec-Neale; The right to life of detainees in armed conflict, Susan Breau; At the hands of the state: when arrest and imprisonment prove fatal, Caroline Fournet. Part III The Denunciation of the Death Penalty: International criminal justice and the death penalty, Steven Freeland; The right to life and abolition of the death penalty in the Council of Europe, Jon Yorke; The death penalty and Russia, Bill Bowring. Part IV Medical Countenance at the End of Life: Assisted suicide, voluntary euthanasia and the right to life, David Benatar; Positive and negative obligations under the right to life in English medical law: letting patients die, Elizabeth Wicks; Conjoined twins: separation as lethal mutilation, Helen Watt. Part V Access to Medical Treatment and the Preservation of (New) Life: Access to medicines and the right to (cultural) life, Johanna Gibson; Assessing vitality: infertility and 'good life' in urban China, Ayo Wahlberg; Illiberal biopolitics and 'embryonic life': the governance of human embryonic stem cell research in China, Kerstin Klein; Index.

The Right to Life and the Value of Life: Orientations in Law, Politics and Ethics