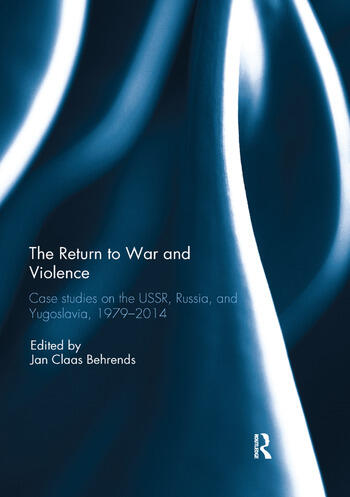 The Return to War and Violence: Case Studies on the USSR, Russia, and Yugoslavia, 1979-2014

This volume includes five case studies on war and the military in the USSR, Russia and Yugoslavia. It argues that the armed forces were at the core of socialist statehood and that their role and their change in late socialism and post-Communism are thus far understudied. Discussing the similarities as well as the differences between the Soviet, the Russian, and the Yugoslav case, the introduction seeks new explanations for war and military violence in these countries. Rather than pointing exclusively to ethnic mobilization and nationalism, it views the transformation and collapse of the Communist party-state and its army as a precondition for violence and civil war. It places these cases using innovative methodological approaches to the research on physical violence, war, and military. These studies explore the experience and the representation of violence, army service, combat, and war in late socialism and scrutinize individual actors and their behaviour within violent spaces. In retrospect the emerging wars in the post-Soviet space – from Chechnya to the Donbas – and in Yugoslavia are at least as crucial for the region as Gorbachev's reforms. They help to better understand the conflicts of the present in the post-Soviet space. This book was originally published as a special issue of Nationalities Papers.

1. War, violence, and the military during late socialism and transition. Five case studies on the USSR, Russia, and Yugoslavia
Jan Claas Behrends

2. Dedovshchina on trial. Some evidence concerning the last Soviet generation of "sons" and "grandfathers"
Alena Maklak

3. Between "ethnocide" and "genocide": violence and Otherness in the coverage of the Afghanistan and Chechnya wars
Philipp Casula

4. "Some call us heroes, others call us killers." Experiencing violent spaces: Soviet soldiers in the Afghan War
Jan Claas Behrends

5. Dead heroes and living deserters: the Yugoslav People’s Army and the public of Valjevo, Serbia, on the verge of war 1991
Robert Lučić

6. Chechen women in war and exile: changing gender roles in the context of violence
Alice Szczepanikova

Jan C. Behrends is a research fellow at the Centre for Contemporary History (ZZF) in Potsdam. He teaches East European history at Humboldt Universität zu Berlin. His areas of interested include modern dictatorships, urban studies and physical violence. His recent publications include "Races to Modernity: Metropolitan Aspirations in Eastern Europe, 1890-1940" (2014) and "Underground Publishing and the Public Sphere: Transnational Perspectives" (2014).

The Return to War and Violence: Case Studies on the USSR, Russia, and Yugoslavia, 1979-2014