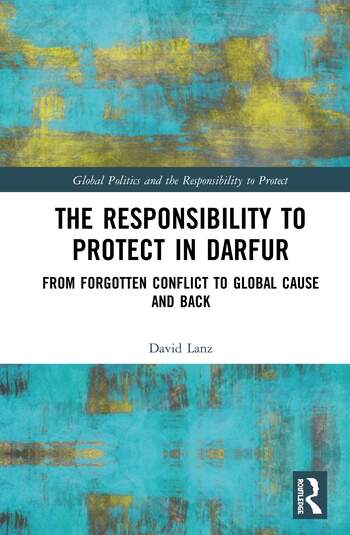 The Responsibility to Protect in Darfur: From Forgotten Conflict to Global Cause and Back

This book analyzes the Responsibility to Protect (R2P) in the context of the conflict in Darfur, using detailed empirical evidence.

The volume traces Darfur’s evolution from forgotten conflict to a major global cause and back to obscurity. The emergence of a far-reaching international response to the war in Darfur began in 2004 and included the most influential international advocacy movement since the anti-apartheid campaign and one of the world’s largest peacekeeping missions. The book analyzes how Darfur slid back into international obscurity after 2011, despite ongoing violence against civilians and the continued risk of conflict escalation following Omar al-Bashir’s ousting in April 2019. Based on an analysis of more than 100 interviews and over 1,000 media reports, the book examines one of the most pressing questions related to the R2P: why do some situations of mass atrocities cause an international outcry, while others are met with complacency and silence? It argues that the presence or absence of a compelling narrative, which frames a situation in moral terms and unambiguously conveys who is responsible, who suffers, and what should be done, facilitates whether or not sufficient traction will be gained to beget a robust R2P response.

This book will be of much interest to students of the Responsibility to Protect, human rights, peacekeeping, conflict resolution, African politics and International Relations in general.

Introduction: Darfur and the Responsibility to Protect

2. Activating R2P: The Social Construction of Darfur as a Test Case for Saving Strangers

3. Implementing R2P: The International Response to the Darfur Conflict

4. Appropriating R2P: The Ramifications of Saving Strangers on the Darfur Opposition

5. Defying R2P: Sudanese Government Reactions to the International Push to Save Strangers in Darfur

6. Deactivating R2P: The Deconstruction of Darfur as a Case for Saving Strangers

Conclusion: Lessons from Darfur as a Test Case for Saving Strangers

David Lanz is currently co-head of the swisspeace Mediation Program and lecturer at the University of Basel, Switzerland.

The Responsibility to Protect in Darfur: From Forgotten Conflict to Global Cause and Back