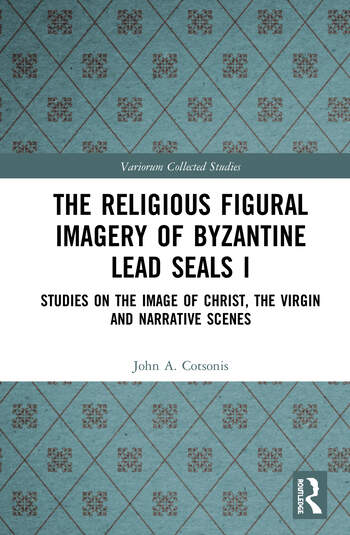 The Religious Figural Imagery of Byzantine Lead Seals I: Studies on the Image of Christ, the Virgin and Narrative Scenes

The articles republished in this volume are ground-breaking studies that employ a large body of religious figural imagery of Byzantine lead seals ranging from the 6th to the 15th century. A number of the studies present tables, charts and graphs in their analysis of iconographic trends and changing popularity of saintly figures over time. And since many of the seals bear inscriptions that include the names, titles or offices of their owners, information often not given for the patrons of sacred images in other media, these diminutive objects permit an investigation into the social use of sacred imagery through the various sectors of Byzantine culture: the civil, ecclesiastical and military administrations. The religious figural imagery of the lead seals, accompanied by their owners’ identifying inscriptions, offers a means of investigating both the broader visual piety of the Byzantine world and the intimate realm of their owners’ personal devotions. Other studies in this volume are devoted to rare or previously unknown sacred images that demonstrate the value of the iconography of Byzantine lead seals for Byzantine studies in general.

This volume includes studies dedicated to the image of Christ, primarily found on imperial seals, various images of the Virgin, and narrative or Christological scenes. A companion volume presents various articles focusing on sphragistic images of saints and on the religious imagery of Byzantine seals as a means of investigating the personal piety of seal owners, as well as the wider realm of the visual piety and religious devotions of Byzantine culture at all levels.

1. To Invoke or Not to Invoke the Image of Christ on Byzantine Lead Seals. That is the Question

2. The Imagery of Patriarch Methodios I’s Lead Seals and the New World Order of Ninth-Century Byzantium

3. The Imagery of Patriarch Ignatios’ Lead Seals and the Rota Fortunae of Ninth-Century Byzantine Ecclesio-Political Policies

4. A Seal of Patriarch Nicholas II

II: VARIOUS RARE IMAGES OF THE VIRGIN ON SEALS

5. The Virgin with the 'Tongues of Fire' on Byzantine Lead Seals

6. The Virgin & Justinian on Seals of the Ekklesiekdikoi of Hagia Sophia

7. The Virgin Aigyptia (the Egyptian) on a Byzantine Lead Seal of Attaleia

8. The Image of the Virgin Nursing (Galaktotrophousa) and a Unique Inscription on the Seals of Romanos

9. The Virgin Lysiponos ("The Deliverer from Pain") on a Byzantine Lead Seal and the Transformation of a Marian Epithet

11. An Early Byzantine Lead Seal with the Image of the Incredulity of Thomas

John A. Cotsonis is Director of the Archbishop Iakovos Library at Holy Cross Greek Orthodox School of Theology, Brookline, MA, a Bishop of the Greek Orthodox Archdiocese of America and a Byzantine art historian specializing in the iconography of Byzantine lead seals. He is the author of Byzantine Figural Processional Crosses which is regarded as the standard work on the subject.

The Religious Figural Imagery of Byzantine Lead Seals I: Studies on the Image of Christ, the Virgin and Narrative Scenes