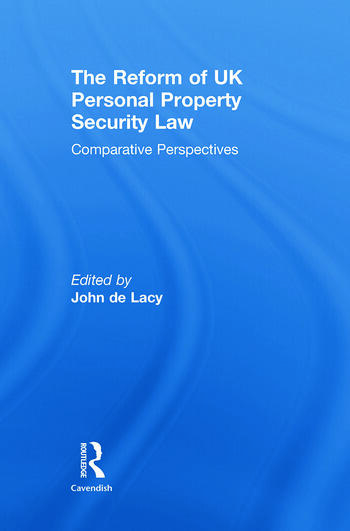 There has been much discussion in the last ten years about the need to reform the law governing company charge registration, with many bodies including the Department of Trade and Industry and Law Commissions considering the case for reform of this area in the context of a wider scheme of personal property security reform. This has culminated in the coming into force of Part 25 of the Companies Act 2006, which is concerned with company charge registration.

This major book features the work of international experts on personal property security law. It focuses on the reform of UK company charge law and argues that the Companies Act 2006 did not go far enough in reforming the law. It addresses the question as to whether the UK should follow the lead of other jurisdictions that have adopted US Article 9 type personal property security schemes. As well as considering current UK law the book also addresses the changes proposed by the Law Commissions and, despite current government inaction, considers whether these reform proposals should be adopted.

The book contains major international comparisons and, in particular, looks at law reform in the USA, Canada, Australia, New Zealand, Singapore and Europe. This comparative treatment gives the reader a full perspective on this difficult and constantly developing area of law.