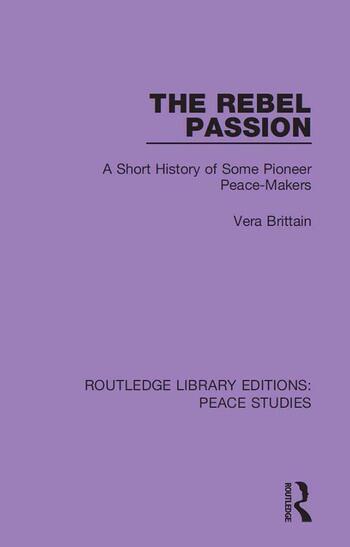 The Rebel Passion: A Short History of Some Pioneer Peace-Makers

Originally published in 1964, The Rebel Passion endeavours to tell the continuous story, in terms of their ideas and personalities and the vital flame that inspired them, of a group of very different yet spiritually related Christians who sought to confront a world involved in deeper conflict than any could fully realize, with the basic essentials of peace. Individual and corporate witness, beginning even before 1914, is presented against the dark background of many countries involved directly or indirectly in war, and illustrates the international scene, dangerous and tragic yet revolutionary and apocalyptic, over the tremendous half-century through which the older generation had lived, and which shaped the lives of their juniors.

In 1941 the last revised edition was issued of a factual historic record of the work of the I.F.o.R. up to twenty years ago. The present book aims at a different treatment, which instead of mainly summarizing missions, conferences and committees, seeks to interpret persons and events rather than merely describe them.

It tries above all to indicate how the philosophy and example of prophetic personalities influenced their various communities, in spite of totally different official values and the consistent opposition of ‘establishments’ to minority opinions based on insight and inspiration. It suggests that the thinking of ordinary individuals with distinguished minds, without the advantage of conspicuous social labels or the opportunity to stand on political pedestals, actually operates as a leaven which changes the thought of a generation. The fact that such a result had been achieved within measurable time should have encouraged those who worked on the contemporary scene to create spiritual foundations for the labours of future man and women.

This book was published to commemorate the fiftieth anniversary of the Fellowship of Reconciliation, founded at Cambridge in December, 1914, and followed by the International Fellowship in 1919.

The Rebel Passion: A Short History of Some Pioneer Peace-Makers