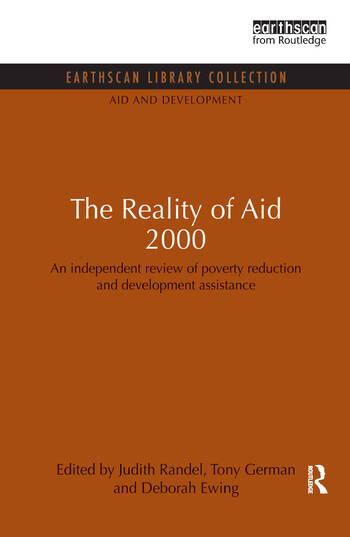 The Reality of Aid 2000: An independent review of poverty reduction and development assistance

NOW IN ITS SEVENTH ANNUAL EDITION, The Reality of Aid 2000 looks at how the performance of OECD donor countries on aid and development cooperation has matched up to the challenge of eliminating absolute poverty. The report charts some improvements at the level of donor policy and rhetoric. But its stark conclusion is that the potential of aid to combat poverty is constantly undermined by governments, both North and South, who fail to address the extreme inequalities of income and the structural, social and political injustices that entrench people in poverty. Part I of The Reality of Aid 2000 presents an overview of poverty in the current global context and an analysis of recent trends in aid - looking particularly at basic education. In Part II, chapters by experts from NGOs in OECD countries and the European Union show how donor aid administrations approach poverty - and highlight the weakness of political commitment in the North to the needs of the poor. Part III sets out Southern perspectives on development cooperation. Part IV provides 'at a glance' comparisons of donors' aid outlook and commitment to development cooperation in the 21st century, poverty eradication, gender and public support. Throughout the book, information is presented in easily interpreted diagrams and graphs. The Reality of Aid has established itself as a unique source of independent evaluation and comment on aid policies and development. It is indispensable for all in the field, whether in the official or voluntary sectors, providing a regular reality check on just how much the international community is doing to realise the achievable goal of eliminating poverty. 'Indispensable ... it gives you most of the hard facts you need to know about the major issues' Nett-' Internationalist 'The most comprehensive and rigorous independent analysis of the aid and development policies of the world's wealthiest nations ... Essential reading' Charity World 'The Reality of Aid remains an essential purchase by the libraries of development institutions and an invaluable reference for development practitioners' Development & Change 'A reliable 'watchdog' for anyone interested in this important aspect of international relations' ORBIT 'An accessible reference ... [it] encompasses many key issues and stimulates further research' Commonwealth & Comparative Politics Originally published in 1999

The Reality of Aid 2000: An independent review of poverty reduction and development assistance