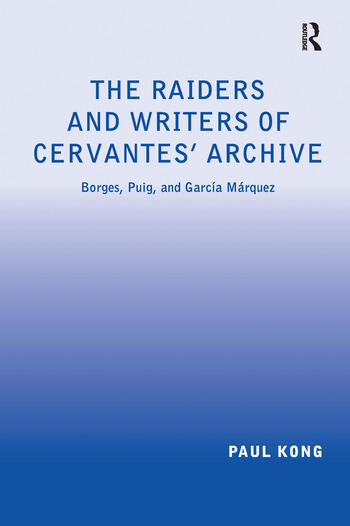 The Raiders and Writers of Cervantes' Archive: Borges, Puig, and García Márquez

Within the context of Miguel de Cervantes Saavedra and his influence on Jorge Luis Borges, Manuel Puig and Gabriel Marquez, Paul Kong brings a variety of theoretical perspectives to bear as he analyzes the concepts of the archive and the manuscript. Setting the stage with an exploration of the intricate and intriguing relationship between the archive and the manuscript, Kong questions the apparently natural association between the two. In the light of Kong's historically contextualized and patient exegesis, the ideological nature of the archive, evident in its charge to serve as a totalizing habitat, stands in contrast with the manuscript that resists attempts to contain it. The playful responses of Borges, Puig and Marquez as they mine the "archive" of Cervantes' works support the anti-colonial dimension of Latin American literature and further problematize the relationship between archive and manuscript. The book concludes with a discussion of the future of archival discourse, especially in the setting of the virtual reality of the Internet and of globalization. Carefully grounded by Kong's close readings and supported by a wealth of astute references and allusions to writers as diverse as Virgil, Wordsworth, and Dickens, The Raiders and Writers of Cervantes' Archive is sure to provoke and intrigue Latin American scholars, narrative theorists, archivists, and those interested in issues related to cultural domination, ideology, and cyberspace.

Contents: Part 1 Archives Versus Manuscripts: Exploring the archive; 'Naturally, a manuscript. Part 2 Cervantes' Archive: TropelÃ­a and 'the dialogue of the dogs'; Descent into TropelÃ­a: Don Quixote in the cave. Part 3 Post-colonial Archives: Borges: lost in the library; Puig: dialogue with the spider woman; GarcÃ­a MÃ¡rquez: archives and manuscripts. Part 4 Archives Go Soft: Archives in the age of technology; Bibliography; Index.

'The Raiders and Writers of Cervantes' Archive is an interesting descent into the secret world of archives, being now invaded and scoured as potentially traumatic experiences. Paul Kong delves into a process of re-definition of such ''wells'' of knowledge, re-structuring them in terms of a psychic entity from which subconscious or unconscious material may emerge.' Library Review

The Raiders and Writers of Cervantes' Archive: Borges, Puig, and García Márquez