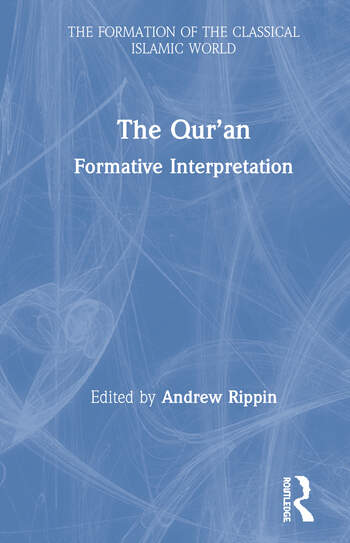 This volume is one of two edited by Andrew Rippin which are designed to complement one another, and to comprehend the principal trends in modern scholarship on the Qur’an. Both volumes are provided with a new introduction by the editor, analysing this scholarship, and providing references for further study. The Qur’an: Formative Interpretation is concerned with the questions that have been addressed within the study of the early interpretation (tafsir) of the Qur’an. These papers exemplify the areas of debate within the field, the need for detailed investigative scholarship of individual texts, and the progress made in the systematic study of these early works.

'...an ideal introduction for degree level study of the Qur’an in the first three hundred years of Islam.' Centre for Islamic Studies Newsletter, 'This book should be read by all students of Qur'anic exegesis for all the valuable information it contains, the sources it open up, and the selected scholarship it offers on problems of continuing interest in the field...' Digest of Middle East Studies 'The volume's main strength rests upon it furnishing a broad overview of academic perspectives and approaches to the formative tradition of exegesis, particularly those which are current and predominant. Comprising many fascinating and thought-provoking contributions, the volume draws attention to the theoretical debates which have prefigured approaches to exegesis, focusing upon the issues of the emergence of canon, together with perceptions of authenticity, historicity and ascription.' Journal of Qur'anic Studies