The Quest for the True Figure of the Earth: Ideas and Expeditions in Four Centuries of Geodesy

In the 1730s two expeditions set out from Paris on extraordinary journeys; the first was destined for the equatorial region of Peru, the second headed north towards the Arctic Circle. Although the eighteenth century witnessed numerous such adventures, these expeditions were different. Rather than seeking new lands to conquer or mineral wealth to exploit, their primary objectives were scientific: to determine the Earth's precise shape by measuring the variation of a degree of latitude at points separated as nearly as possible by a whole quadrant of the globe between Equator and North Pole. Although such information had consequences for navigation and cartography, the motivation was not simply utilitarian. Rather it was one theme among many in an intellectual revolution in which advances in mathematics paralleled philosophical strife, and reputations of the living and the dead stood to be elevated or destroyed. In particular the two expeditions hoped to prove the correctness of Isaac Newton's prediction that the Earth is not a perfect sphere, but flattened at the poles. In this study, the 'Figure of the Earth' controversy is for the first time comprehensively explored in all its several dimensions. It shows how a largely neglected episode of European science, that produced no spectacular process or artefact - beyond a relatively minor improvement in maps - nevertheless represents an almost unique combination of theoretical prediction and empirical method. It also details the suffering of the two teams of scientists in very different extremes of climate, whose sacrifices for the sake of knowledge rather than colonial gain, caught the imagination of the literary world of the time.

Contents: Author's preface; A dispute in the making; Prelude to an odyssey; Some technicalities; The Lapland expedition; The Peru expedition; Meanwhile in Paris; Death and deliverance; A grievous aftermath; Once more unto the Meridian; A modern postscript; Appendices; Select reading list; Index.

Dr Michael Rand Hoare is Emeritus Reader at the University of London, UK.

'I recommend it as a reliable and readable account of one of the most interesting episodes in the history of science in eighteenth-century France.' International Journal of Maritime History ’This book addresses an audience of historians, geodesists but also clearly a much broader audience, thanks to its numerous illustrations, and clever use of notes per chapter and annex, allowing the author to tell this story, mixing complex scientific issues and controversies [...], true adventures in remote and hostile countries as well as human courage and ingenuity... For readers more familiar with geodesy, this book is specially appealing because it does not only describe the human adventures related to these expeditions, as well as the famous scientists, involved [...] but it also addresses some technical issues not often discussed in historical literature: availability of new instruments [...], data reduction and processing.’ Journal of Geodesy ’This book, published in the series 'Science, Technology and Culture, 1700-1945', is a valuable addition to the history of geodesy... It is a good read and contains valuable information also for professional historians of science interested in eighteenth-century geodesy or the complex character of Enlightenment science in general.’ Nuncius ’[Hoare] has made full use of eighteenth-century publications in several languages, but has also done a wonderful job of bringing the story to life. He is especially good at explaining the fundamentals of the geodetic procedures and his book is generously illustrated with period engravings... the book will be far more appealing to readers of H-France than one might guess from the title of the book. It is warmly recommended to anyone interested in Enlightenment history.’ H-France ’Well-written and carefully produced, The Quest for the True Figure of the Earth is an exciting book that makes science come to life.’ Pure and Applied Geophysics ’Le livre est très agréable Ã 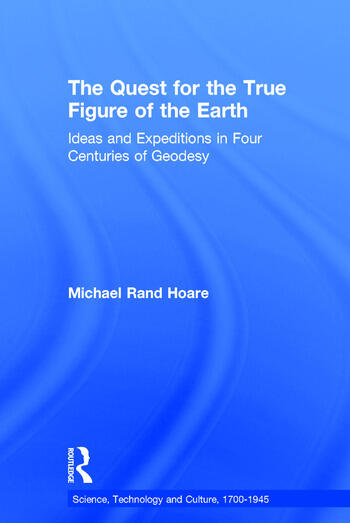 The Quest for the True Figure of the Earth: Ideas and Expeditions in Four Centuries of Geodesy