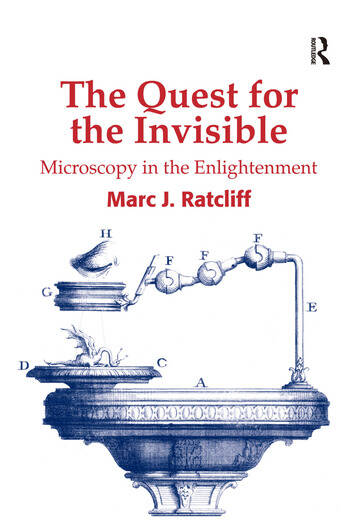 The Quest for the Invisible: Microscopy in the Enlightenment

The eighteenth century has often been viewed as a period of relative decline in the field of microscopy, as interest in microscopes seemed to wane after an intense period of discovery in the seventeenth century. As such, developments in the field during the Enlightenment have been largely overlooked. This book therefore fills a considerable gap in the study of this life science, providing a thorough analysis of what the main concerns of the field were and how microscopists learned to communicate with each other in relevant ways in order to compare results and build a new discipline. Employing a substantial body of contemporary literature from across Europe, Marc J. Ratcliff is able to present us with a definitive account of the state of research into microscopy of the period. He brings to light the little known work of Louis Joblot, re-evaluates the achievements of Abraham Trembley and gives new weight to Otto-Friedrich MÃ¼ller's important contributions. The book also connects changes in instrument design to an innovative account of microscopical research during the eighteenth century and the rich social networks of communication that grew during this period. Investigating the history of microscopical research from 1680 up to 1800 also shows how scholars progressively established a modern rule on which to shape their new discipline: balancing microscopical magnification with shared vision. This rule developed in response to the diminishing size of the microscopical object during the course of the eighteenth century, from dry minute organisms such as insects, to aquatic minute bodies such as polyps, and finally to aquatic invisible organisms, thus completing the scholar's quest to study the invisible. This book will be essential reading for historians of microscopy, epistemologists, and for historians of the life sciences in the modern period.

Contents: Introduction: reasons for a new historiography; Part 1 The Definition of Good Microscopical Objects 1680-1740: Production and visibility of microscopes in the first half of the 18th century; The study of animalcules at the turn of the 18th century; Insects, hermaphrodite and ambiguity. Part 2 The Break with the Past 1740-1760s: Towards marketing strategies for the microscope in the second half of the 18th century; Abraham Trembly, the polyp and new directions for microscopical research; The disputes over authority and microscopical observations. Part 3 Infusoria and Microscopical Experiments: The True Invisible Objects 1760s-1800s: The quantifying spirit in microscopical research and 'keeping up' with invisible objects; The emergence of the systematics of infusoria; From spontaneous generation to the limits of life: the microscopical experimentalist research from the 1760s to 1800; Conclusion; Bibliography; Indexes.

Marc J. Ratcliff is based at the University of Geneva, Switzerland. In 2005 he won the History of Science Society Derek Price/Rod Webster Award for a paper on Abraham Trembley published in ISIS. He is currently working on twentieth-century psychology.

'This sparkling study of eighteenth-century science challenges modern assumptions that the microscope was usually regarded as little more than a scientific toy. By taking an entirely fresh approach, Marc J. Ratcliff shows that eighteenth-century microscopy in Europe is shockingly underestimated. Path-breaking work was indeed produced by scientific researchers. One innovative aspect is that he brings together many different individuals and different research traditions - for the first time, microscopy can be seen as an international enterprise, where correspondence, texts, illustrations, instruments, and specimens regularly crossed national boundaries and helped create a unique body of achievement. Another is to focus on the actual practices of microscopical investigation. Here Ratcliff evocatively describes the difficulties scholars encountered in representing the world of the invisible, and how they struggled to come to a consensus about visual and verbal conventions to indicate phenomena such as scale. Yet another is to critique the way we look back into the past with modern specializations in mind. These microscopical workers were as keen to philosophize about spontaneous generation and the origins of life as they were to investigate pond water or hunt for specks of living matter in detritus. Along the way, we come across a wonderful menagerie of animalcules, cochineal insects, polyps, and fungi. The world of the very small is revealed as problematic and utterly intriguing to the eighteenth-century people who attempted to describe it. Comprehensive, provocative, revisionist- this highly original book is sure to excite comment and command respect.' Janet Browne, Author of Charles Darwin: Voyaging and Charles Darwin: The Power of Place ’... fills an important gap in available treatments on the history of microscopy. Recommended.’ Choice ’Ratcliff has provided an excellent case study of how knowledge is gained and how it is shared. His multilayered appro

The Quest for the Invisible: Microscopy in the Enlightenment