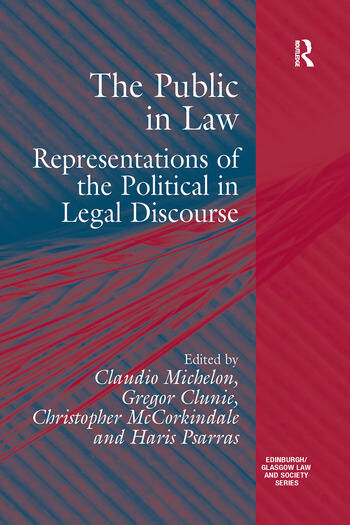 The Public in Law: Representations of the Political in Legal Discourse

Bringing together established academics and new researchers, the chapters in this collection interrogate the operation of 'the public' in a range of different legal, illegal and alegal spaces. The key question which frames the contributions is whether and in what manner 'the public' operates as an interface between law and society, allowing the interests and opinions of the population at large to be represented and reflected in legal discourse, such that collectively generated imperatives may be imposed upon political and economic actors. Multi-disciplinary in its approach, the volume reflects an understanding that there is more to the role of 'the public' in relation to law than the conventional demarcation of the field of 'public law' and that this relationship is open to comment from a wide range of actors.

Contents: Editors' introduction; On the necessarily public character of law, Neil Walker. Part I Constituted Publics: Rediscovering ’the public’: the curious case of Benjamin Constant, Christopher McCorkindale; Democracy, political parties and the will of the people, Andrew Maloney; Between contract and constitution: international organizations and the protection of global public interests, Richard Collins. Part II Unconstituted Publics: 'Unconstituted publics'?, Scott Veitch; A dilemma for the civil disobedient: pleading 'guilty' or 'not guilty' in the courtroom?, Piero Moraro; Justifying civil disobedience with reference to EU public consensus, Haris Psarras. Part III Excluded Publics: Excluded publics - included privates: the Janus-headed nature of the liberal public-private divide, Daniel Augenstein; The prisoner's right to vote: the creation of an abnormal and excluded public, Vanessa De Greef; Subjects to citizens: 'native' enfranchisement in reconstituting the imperial public of the British Empire c. 1887-1914, Coel Kirkby. Part IV Public/Private: The public/private dichotomy and the unity of capitalist (re-)production, Gregor Clunie; The public nature of private law, Claudio Michelon; Between the public and the private: banking law in 1830s England, Iain Frame; The public-ness of development in the World Trade Organisation, Stephanie Switzer. Part V Emerging Publics: the Role of the Victim in International Criminal Justice: The impact of the distinction between situations and cases on the participation of victims in the International Criminal Court, Ania Salinas and James Sloan; Addressing the interests of victims: perspectives from the office of the prosecutor, Olivia Swaak-Goldman; Victims' access to the International Criminal Court: much remains to be done, Gilbert Bitti and LeÃ¯la Bourguiba; Index.

Claudio Michelon is Lecturer in Law, University of Edinburgh. He was previously Adjunct Professor, Federal University of Rio Grande do Sul (Brazil). He is Secretary-General of the International Association for Philosophy of Law and Social Philosophy and President of the Brazilian Institute for Legal Philosophy (IBFD). Gregor Clunie is a PhD Candidate, University of Glasgow. Christopher McCorkindale is Lecturer in Law, Glasgow Caledonian University. His recent publications include a book on `The Legal Thought of Hannah Arendt'. Haris Psarras is a Tutor in Jurisprudence and in Legal Reasoning & Legal System, School of Law, University of Edinburgh. He is also Attorney at Law, Athens Bar.

The Public in Law: Representations of the Political in Legal Discourse