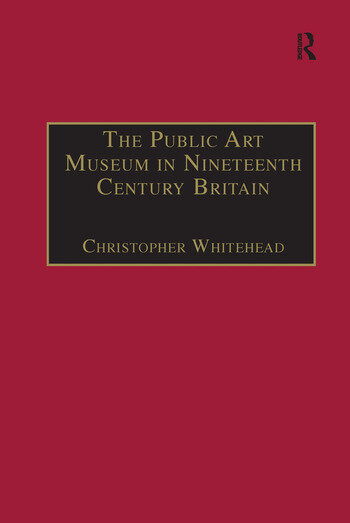 The Public Art Museum in Nineteenth Century Britain: The Development of the National Gallery

During the mid-nineteenth century a debate arose over the form and functions of the public art museum in Britain. Various occurrences caused new debates in Parliament and in the press about the purposes of the public museum which checked the relative complacency with which London's national collections had hitherto been run. This book examines these debates and their influence on the development of professionalism within the museum, trends in collecting and tendencies in museum architecture and decoration. In so doing it accounts for the general development of the London museums between 1850 and 1880, with particular reference to the National Gallery. This involves analysis of art display and its relations with art historiography, alongside institutional and architectural developments at the British Museum, the South Kensington Museum and the National Gallery. It is argued that the underpinning factor in all of these developments was a reformulation of the public museum's mission, which was in turn related to the electoral reform movement. In a potential situation of mass enfranchisement, the 'masses' should be well educated; the museum was openly identified as a useful institution in this sense. This consideration also influenced approaches to collecting and arranging artworks and to configuring their architectural setting within the museum, allowing for displays to be instructive in specific ways. Dissatisfaction with the British Museum and National Gallery buildings and their locations led to proposals to move the national collections, possibly merging and redefining them. Again the socio-political usefulness of the museum was key in determining where the national collections should be housed and in what form of building. This rich debate is analysed with full references to the various forums in and out of Parliament. Part one covers these issues in a thematic structure, examining all of the national collections, their interrelationships and their gradual development of discrete (yet sometimes arbitrary) museological territories. Part two focuses on the individual case of the National Gallery, observing how museological debate was brought to bear on the development of a specific institution. Every architectural development and redisplay is closely analysed in order to gauge the extent to which the products of debate were carried through into practice, and to comprehend the reasons why no museological grand project emerged in London.

'Christopher Whitehead has written a useful and careful account of the National Gallery at a crucial phase in its development... The kind of meticulously-researched work Whitehead has carried out in his study can seem less glamorous than broad theorizing, but it has the virtue of being responsible, humane, and liable to offer important insights into historical and contemporary developments... Whitehead has done students of art and of museum a real service with this solid, thoughtful, and sensitive account of the kinds of ideas, aspirations, and even false starts that shape culture.' Victorian Studies ’... for those with a deep interest in the evolution of the public art gallery, this is a rewarding volume that offers an able and admirably thorough analysis of the emergence of museological principles and practices that are still very much with us today.’ The London Journal ’Whitehead’s marshalling and presentation of evidence is exemplary, and his range of sources copious. He is invariably judicious and passes lightly over points which other academics might hammer into assertive, would-be-revisionist articles.’ Museum and Society

The Public Art Museum in Nineteenth Century Britain: The Development of the National Gallery