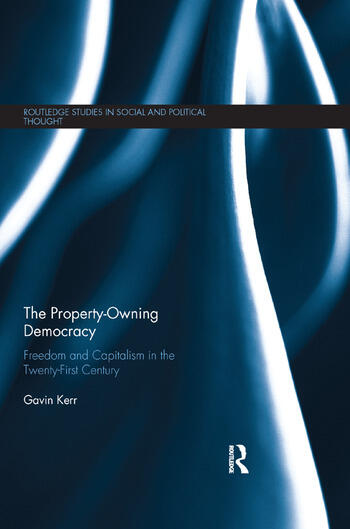 The Property-Owning Democracy: Freedom and Capitalism in the Twenty-First Century

The ideas of ‘predistribution’ and the property-owning democracy have recently emerged as the central features of the progressive social liberal response to the problems of poverty, unemployment, economic insecurity, burgeoning socio-economic inequality, and economic instability, none of which the more familiar institutions of welfare state capitalism seem able effectively to solve. These social liberal proposals for institutional reform have, however, been rejected by ‘neo-classical’ liberals who have attempted to modernize and revitalize the traditional classical liberal case for a set of ‘market democratic’ laissez-faire institutions. This book makes a fresh attempt to demarcate an area of common ground between the positions occupied by classical and social liberals by identifying a set of institutional arrangements to which both can agree, while at the same time recognizing that there will be many important issues about which liberal (and non-liberal) political and social thinkers will continue strongly to disagree.

Drawing on ideas and arguments identifiable within a particular branch of the left-libertarian tradition, the book develops market democratic interpretations of the ideas of predistribution and the property-owning democracy, and presents a powerful case for an institutional reform which constitutes a genuinely progressive alternative to more familiar social democratic institutions. By identifying progressive predistributive institutions as essential conditions both for the effective protection of 'market freedom' and for the maximization of the substantive opportunities of the least advantaged members of society, the book shows how these institutions may be justified on grounds which both classical and social liberals may reasonably be expected to endorse.

1. Classical Liberalism and the Idea of Market Freedom

2. Social Liberalism, the Idea of Social Freedom, and the Marginalization of Market Freedom

3. Geo-Classical Liberalism and the Unorthodox Conception of Market Freedom

4. Justice as Fairness and the Priority of Substantive Opportunity

5. Liberal Socialism and the Right to Private Property

Conclusion: The Market Democratic Property-Owning Democracy: A Radical Yet Modest Proposal Whose Time Has (Almost) Come

Gavin Kerr is a researcher whose interests lie at the intersection of the fields of politics, philosophy, and economics. His work focuses in particular on the relationship between the classical and social liberal traditions, and on the ideas of market democracy and the property-owning democracy.

Gavin Kerr’s new book shows that the movement for a Property Owning Democracy has been searching for something the Geo-Liberal movement found long ago: a pre-distributive mechanism that can create a more equal society by changing individual starting points without all of the distortionary effects of more traditional re-distributive measures. Kerr shows how rent and resource taxes can do just that and argues eloquently that they are needed now more than ever. - Karl Widerquist, Georgetown University

"Gavin Kerr’s book makes an outstanding contribution to the growing body of literature that challenges the conventionally assumed incompatibility of substantive egalitarianism with classical liberalism’s and libertarianism’s concern for individual liberty." - Hillel Steiner, University of Manchester and University of Arizona

The renewed attention to foundational issues concerning inequality in recent political philosophy is the starting point for Gavin Kerr's scholarly and rigorous defense of the "geoclassical" liberalism of Smith, Ricardo and Henry George. Kerr defends an asset based egalitarianism that stabilizes a classic liberal account of justice by socializing the economic rent that accrues to land. Both classical and "high" liberals will learn a great deal from Kerr's persuasive and detailed argument for his innovative conclusions in a book that deserves to be widely read by political philosophers, economists and political scientists. - Alan Thomas, University of York

The Property-Owning Democracy: Freedom and Capitalism in the Twenty-First Century