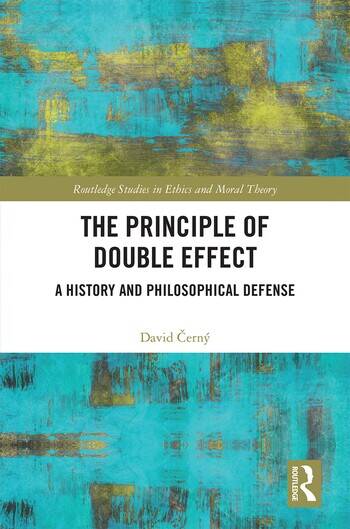 The Principle of Double Effect: A History and Philosophical Defense

This book offers a comprehensive history of the principle of double effect and its applications in ethics. Written from a non-theological perspective, it makes the case for the centrality of the double effect reasoning in philosophical ethics.

The book is divided into two parts. The first part thoroughly examines the history of double effect reasoning. The author’s history spans from Thomas Aquinas’s opera omnia to the modern and influential understanding of the principle known as proportionalism. The second part of the book elucidates the principle and addresses various objections that have been raised against it, including those that arise from an in-depth discussion of the trolley problem. Finally, the author examines the role of intentions in ethical thinking and constructs a novel defense of the principle based on fine distinctions between intentions.

The Principle of Double Effect: A History and Philosophical Defense will be of interest to scholars and advanced students working in moral philosophy, the history of ethics, bioethics, medical ethics, and the Catholic moral tradition.

2. A Brief History of the Principle: Thomas Aquinas

3. A Brief History of the Principle: Cajetan to J. P. Gury

5. The Principle of Double Effect and Trolleyology

6. Defence of the Principle of Double Effect

David Černý studied in Bologna and Rome, received his Ph.D. in Philosophy from Charles University in Prague. He is a Research Fellow at the Institute of State and Law and the Institute of Computer Science of the Czech Academy of Sciences. He has widely published in the Czech and Italian languages.

The Principle of Double Effect: A History and Philosophical Defense