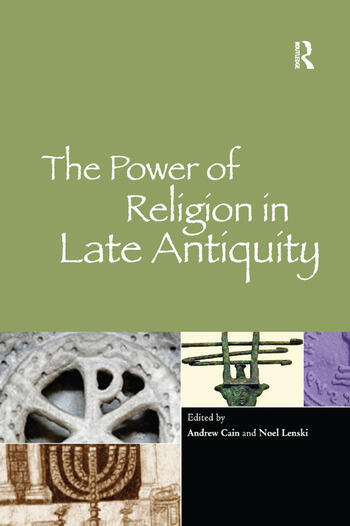 The Power of Religion in Late Antiquity

Late Antiquity witnessed a dramatic recalibration in the economy of power, and nowhere was this more pronounced than in the realm of religion. The transformations that occurred in this pivotal era moved the ancient world into the Middle Ages and forever changed the way that religion was practiced. The twenty eight studies in this volume explore this shift using evidence ranging from Latin poetic texts, to Syriac letter collections, to the iconography of Roman churches and Merowingian mortuary goods. They range in chronology from the late third through the early seventh centuries AD and apply varied theories and approaches. All converge around the notion that religion is fundamentally a discourse of power and that power in Late Antiquity was especially charged with the force of religion. The articles are divided into eight sections which examine the power of religion in literature, theurgical power over the divine, emperors and the deployment of religious power, limitations on the power of the ecclesiastical hierarchy, the use of the cross as a symbol of power, Rome and its transformation as a center of power, the power of religion in the barbarian west, and religious power in the communities of the east. This kaleidoscope of perspectives creates a richly illuminating volume that add a new social and political dimension to current debates about religion in Late Antiquity.

Contents: Introduction: power and religion on the frontier of late Antiquity, Noel Lenski; Part I Religion and the Power of the Word: Disarming Aeneas: Fulgentius on Arms and the Man, Emily Albu; 'Apocalypse? No' - the power of millennialism and its transformation in late Antique Christianity, Josef LÃ¶ssl; Clementissimus imperator: power, religion and philosophy in Ambrose's De obitu Theodosii and Seneca's De clementia, Giacomo Raspanti; Haec quibus uteris verba: the Bible and Boethius' Christianity, Danuta Shanzer. Part II Power over the Divine: Porphyry, Iamblichus and the Struggle for the Philosophical Tradition: The power of religious rituals: a philosophical quarrel on the eve of the great persecution, Elizabeth DePalma Digeser; Subjugating the divine: Iamblichus on the theurgic evocation, Sergio Knipe; Arbiter of the oracular: reading religion in Porphyry of Tyre, Aaron P. Johnson. Part III Emperors and the Deployment of Religious Power: Church, state and children: Christian and imperial attitudes toward infant exposure in late Antiquity, Judith Evans Grubbs; Imperial politics at the court of Theodosius II, Hugh Elton; 'The trembling of Cain': religious power and institutional culture in Justinianic oath-making, Charles Pazdernik; Power from humility: Justinian and the religious authority of monks, Hartmut Leppin. Part IV Ecclesiastical Hierarchies and the Limits of Religious Power: Currencies of power: the veniality of offices in the later Roman empire, Sabine R. Huebner; Religion and power in the early thought of John Chrysostom, Justin Stephens; 'The truth shall make you free': Augustine on the power of religion, Gillian Clark; 'Our own most severe judges': the power of penance in the Eusebius Gallicanus sermons, Lisa Bailey. Part V Constantine and the Power of the Cross: Solar power in late Antiquity, H.A. Drake; 'How to read a halo: 3 (or more) versions of Constantine's vision, Jacqueline Long; The power of the Cross: celestial cross appearances in the

Andrew Cain is Assistant Professor and Noel Lenski is Associate Professor in the Department of Classics, University of Colorado at Boulder, USA.

The Power of Religion in Late Antiquity