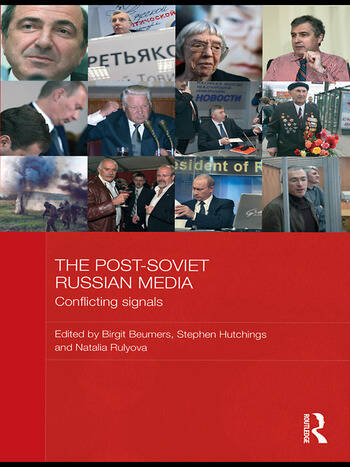 This book explores developments in the Russian mass media since the collapse of the USSR in 1991. Complementing and building upon its companion volume, Television and Culture in Putin's Russia: Remote Control, it traces the tensions resulting from the effective return to state-control under Putin of a mass media privatised and accorded its first, limited, taste of independence in the Yeltsin period. It surveys the key developments in Russian media since 1991, including the printed press, television and new media, and investigates the contradictions of the post-Soviet media market that have affected the development of the media sector in recent years. It analyses the impact of the Putin presidency, including the ways in which the media have constructed Putin’s image in order to consolidate his power and their role in securing his election victories in 2000 and 2004. It goes on to consider the status and function of journalism in post-Soviet Russia, discussing the conflict between market needs and those of censorship, the gulf that has arisen separating journalists from their audiences. The relationship between television and politics is examined, and also the role of television as entertainment, as well as its role in nation building and the projection of a national identity. Finally, it appraises the increasingly important role of new media and the internet. Overall, this book is a detailed investigation of the development of mass media in Russia since the end of Communism and the collapse of the Soviet Union.

Introduction Birgit Beumers, Stephen Hutchings and Natalia Rulyova  Part One: Media, Politics and State  1. Free to get rich and fool around Ivan Zassoursky  2. Where did it all go wrong? Russian television in the Putin era John A. Dunn  3. Shifting media and the failure of political communication in Russia Samuel A. Greene  4. The end of independent television? Elite conflict and the reconstructing the Russian television landscape Tina Burrett  Part 2: The Language of the Media  5. Putin and the tradition of the interview in Russian discourse Anna Maslennikova 6. What’s in a foreign word: Negotiating linguistic culture on Russian radio programmes about language Lara Ryazanova-Clarke Part 3: The Media and Memory 7. The conundrum of memory: Young people and their recollections of Soviet television Ellen Mickiewicz 8. Commemorating the past/performing the present: Television coverage of WWII victory celebrations and the (de)construction of Russian nationhood Stephen Hutchings and Natalia Rulyova Part 4: Culture, State and Empire in Television Serials  9. The culture of serialization, or the serialization of culture Birgit Beumers  10. The State Face: The empire’s televisual imagination Nancy Condee  Part 5: New Media, Censorship and Identity  11. New media, new Russians, new abroad: Towards a non-nationalist paradigm Robert Saunders 12. Russia’s internet media policies: Open space and ideological closure Vlad Strukov

Birgit Beumers is Reader in Russian at the University of Bristol. She completed her D.Phil at St Antony’s College, Oxford and specialises on contemporary Russian culture, especially cinema and theatre. Her publications include Burnt by the Sun (2000), Nikita Mikhalkov (2005), PopCulture: Russia! (2005) and, as editor, Russia on Reels: The Russian Idea in Post-Soviet Cinema (1999) and 24 Frames: Russia and the Soviet Union (2007). She is editor of the online journal KinoKultura and of the journal Studies in Russian and Soviet Cinema.

Natalia Rulyova is a Lecturer in Russian at the Centre for Russian and East European Studies, University of Birmingham since 2006. She completed her PhD on Joseph Brodsky at the University of Cambridge. Subsequently, she was a lecturer and research fellow at the University of Surrey, where she worked on the project ‘Post-Soviet Television Culture’ headed by Stephen Hutchings. She has authored and edited a number of articles on Russian poetry in translation, film and media, and is currently co-writing a monograph on post-Soviet television culture.