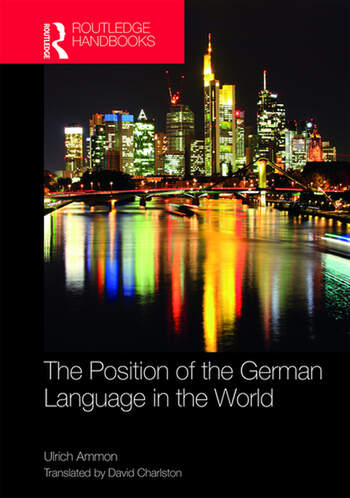 The Position of the German Language in the World

The Position of the German Language in the World focuses on the global position of German and the factors which work towards sustaining its use and utility for international communication.

From the perspective of the global language constellation, the detailed data analysis of this substantial research project depicts German as an example of a second-rank language. The book also provides a model for analysis and description of international languages other than English. It offers a framework for strengthening the position of languages such as Arabic, Chinese, French, Portuguese, Spanish and others and for countering exaggerated claims about the global monopoly position of English. This comprehensive handbook of the state of the German language in the world was originally published in 2015 by Walter de Gruyter in German and has been critically acclaimed.

Suitable for scholars and researchers of the German language, the handbook shows in detail how intricately and thoroughly German and other second-rank languages are tied up with a great number of societies and how these statistics support or weaken the languages’ functions and maintenance.

A. The German Language between National Interests and Global Communication: Terminology and Theory

B. ‘German language’, ‘German-language territory’: what these terms include and exclude, and the question of a German ethnic group

E. German as minority language, but not official language of state

H. German in Diplomacy and the European Union (EU)

I. German in Media and Language Arts outside the German-Language Territory

J. German as a foreign language (GFL) outside the German official-language territory

K. Policies for promoting the German language in the world

Ulrich Ammon was Professor of German Linguistics with Sociolinguistics at the University of Duisburg-Essen. He taught at universities all over the world, including: The University of North Carolina, Chapel Hill, USA; in Australia at the University of Sydney, Australian National University in Canberra; in Japan at Dokkyo University, Soka; and in Austria at Vienna University. Ammon was a member of several scientific organisations and was President of the International Association of Applied Linguistics (GAL) from 2003–2006. He was involved in many third-party projects funded by the German Research Foundation, the Volkswagen Foundation, the Fritz Thyssen Foundation, the European Union and the German Academic Exchange Service. His main research interests were: sociolinguistics, language policy, international language research, variation linguistics and dialectology.

The Position of the German Language in the World