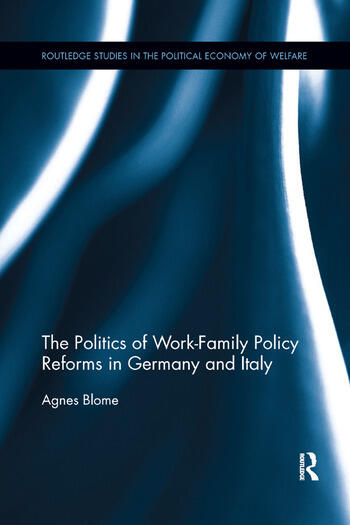 The Politics of Work-Family Policy Reforms in Germany and Italy

One of the fundamental challenges facing modern welfare states is the question of work-family reconciliation. An increasing share of mothers work, but many European welfare states do not adequately support the dual-earner model, especially in southern Europe.

After 2005, German policy-makers transformed the nature of Germany’s family policy regime through a number of legislative measures, whilst Italy, a country with many similarities, witnessed little change. Using a multi-methods approach, this book addresses the puzzle of why Germany was able to implement far-reaching reforms in this policy area after a long impasse and Italy was not. As such, it delivers a broad, systematic account of these reforms and sheds light on why similar reforms were not also adopted in other similar welfare states at the same time. More generally, it contributes to understanding the determinants of welfare policy change in modern European welfare states.

This text will be of key interest to scholars, students and professionals working on topics linked to European politics, welfare and work-family policies, comparative politics, social policy, and more broadly to political science and gender studies.

3. Design and Evolution of Work-Family Policies: A European Comparative Overview

4. Policy Developments in Germany and Italy: From a Shared Focus on The Male-Breadwinner Model to Diverging Paths after The 1990s

8. Italy: No Consensus for Change

The Politics of Work-Family Policy Reforms in Germany and Italy