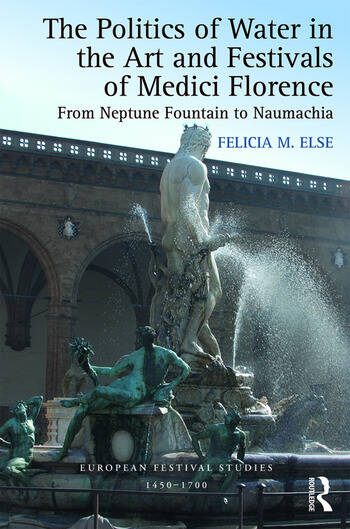 The Politics of Water in the Art and Festivals of Medici Florence: From Neptune Fountain to Naumachia

This book tells the story of one dynasty's struggle with water, to control its flow and manage its representation. The role of water in the art and festivals of Cosimo I and his heirs, Francesco I and Ferdinando I de' Medici, informs this richly-illustrated interdisciplinary study. Else draws on a wealth of visual and documentary material to trace how the Medici sought to harness the power of Neptune, whether in the application of his imagery or in the control over waterways and maritime frontiers, as they negotiated a place in the unstable political arena of Europe, and competed with foreign powers more versed in maritime traditions and aquatic imagery.

1. The Arrival of Cosimo’s Neptune: Early Works and Influences from Abroad

2. Art and Festival: The Neptune Fountain in the Piazza della Signoria and the Entrata of Johanna of Austria in 1565

3. Granducal Florence and the Age of Francesco I, 1566–1587: Courtly Pleasures and the Decline of Public Authority

4. A Revitalized Age: Ferdinand I and the Wedding of 1589

Felicia M. Else is Professor of Art History in the Department of Art and Art History at Gettysburg College.

The Politics of Water in the Art and Festivals of Medici Florence: From Neptune Fountain to Naumachia