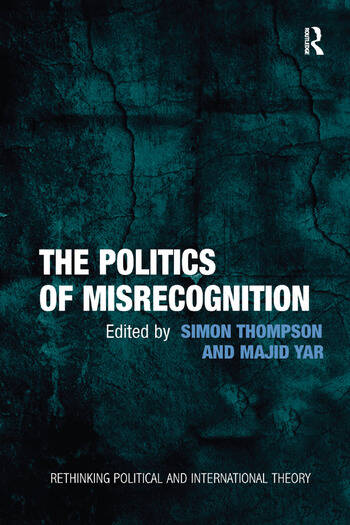 The Politics of Misrecognition

The past several decades have seen the emergence of a vigorous ongoing debate about the 'politics of recognition'. The initial impetus was provided by the reflections of Charles Taylor and others about the rights to cultural recognition of historically marginalized groups in Western societies. Since then, the parameters of the debate have considerably broadened. However, while debates about the politics of recognition have yielded significant theoretical insights into recognition, its logical and necessary counterpart, misrecognition, has been relatively neglected. 'The Politics of Misrecognition' is the most meticulous reflection to date on the importance of misrecognition for the understandings of our political and personal experience. A team of leading experts from a range of disciplines, including philosophy, political theory, sociology, psychoanalysis, history, moral economy and criminology present different theoretical frameworks in which the politics of misrecognition may be understood. They apply these frameworks to a wide variety of contexts, including those of class identity, disability, slavery, criminal victimization and domestic abuse. In this way, the book provides an essential resource for anyone interested in the dynamics of misrecognition and their implications for the development of political and social theory.

'This groundbreaking collection offers in my view a rich and very diversified theoretical account of the phenomena associated with the concept of misrecognition. Scholars from various disciplines, including philosophy, political theory, sociology, psychoanalysis, history, moral economy and criminology take an in-depth look at this notion and offer new insights that confirm the fruitfulness of a program of research which was initiated some twenty years ago by Axel Honneth, Charles Taylor and Nancy Fraser. The book moves a step forward, further away from the abstract, idealized and simplified theories of justice, to embrace a whole range of issues that relate to the experience of injustice. It is a very original collection of essays that will have a lasting effect on future research dealing with the concept of recognition.' Michel Seymour, Université de Montréal, Canada 'This edited volume offers a timely intervention since it is the first that explicitly shifts the theoretical focus from recognition to misrecognition as a distinctive and fruitful concept for critical theory. Some individual contributions demonstrate how a focus on misrecognition can generate new insights into a range of social phenomena including crime, disability and the unequal division of labour.' Shane O'Neill, Queen's University Belfast, UK

The Politics of Misrecognition