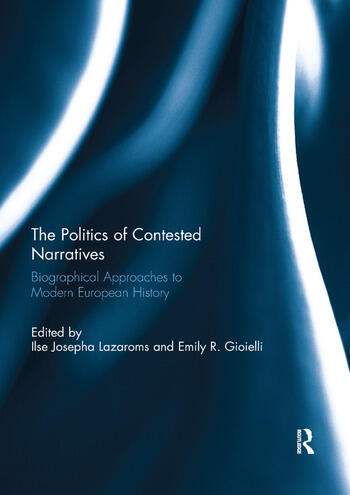 The twentieth century in Europe was characterized by great moments of rupture, with two world wars, ideological conflict, and political polarization. In these processes, as well as in the historical writing that followed in its wake, the individual as an historical entity often appeared crushed. In line with contemporary theories about the precariousness of historical writing and the self, this volume seeks to understand the important developments in modern Europe from the perspective of the single, sometimes isolated, but always original viewpoint of individuals inhabiting the space at the other side of the traditional grand narratives. Including theoretical chapters as well as detailed case studies, this volume takes a biographical approach to dystopian events—the Holocaust, Fascism, Communism, and collectivization—by starting with the voices of unknown historical actors and relating their experiences to larger processes in modern European history, such as the emergence of the national, collective memory, and state formation, as well as changes in the understanding of modern identities and the (re)formulation of the self.

This book was originally published as a special issue of the European Review of History — Revue Européenne d’histoire.

3. Living Mitteleuropa in the 1980s: A network of Hungarian and West German Intellectuals Victoria Harms

8. Public festivities and the making of a national poet: a case study of Alexander Pushkin’s biography in 1899 and 1937 Anastasia Felcher

9. Self-identification through narrative: reflection on the collectivisation of agriculture in Bulgaria
Yana Georgieva Yancheva

10. Biography and social change: industrialists and the Communist revolution in Yugoslavia Mitja Sunčič

11. The secret life of us: 1984, the miners’ strike and the place of biography in writing history ‘from below’ Daryl Leeworthy

Ilse Josepha Lazaroms is a Prins Fellow at the Center for Jewish History in New York City, USA. She received her PhD from the Department of History & Civilization at the European University Institute in Florence, Italy, in 2010. Her first book, The Grace of Misery: Joseph Roth and the Politics of Exile, 1919–1939, was published in 2013. Her articles have appeared in the Leo Baeck Yearbook, the Simon Dubnow Institute Yearbook, and Zutot: Perspectives on Jewish Culture. She is on the Academic Board of the European Review of History, and a contributor to The Jewish Quarterly. Her current research focuses on responses to catastrophe and narratives of anti-Jewish violence in Central Europe and in particular Hungary.

Emily R. Gioielli is currently a doctoral candidate in the Department of History at Central European University, Budapest, Hungary. Her research focuses on the social and international history of the White Terror in post-World War I Hungary. She is also the Editor of the Online Review Database for East Central Europe and has contributed to the European Review of History and Zeitschrift für Ostmitteleuropa-Forschung. In 2012–2013 she was a Dissertation Fellow with the American Council of Learned Societies.